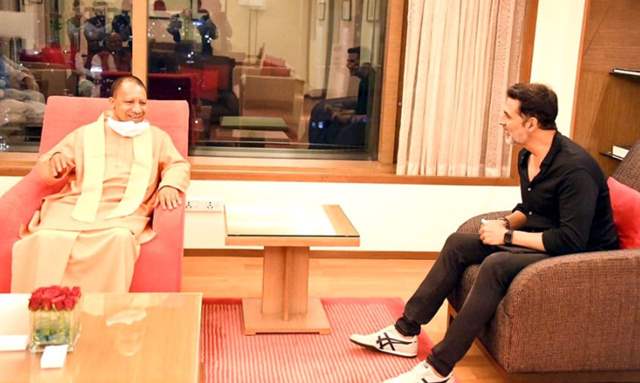 Recently, Bollywood star Akshay Kumar met Uttar Pradesh CM Yogi Adityanath in Mumbai. The two got together for a dinner at a hotel in the city followed by a discussion over his upcoming film 'Ram Setu'; reported PTI.

The pictures of their meeting went viral and fans can’t stop admiring his favorite star.

Meanwhile, CM Yogi Adityanath also took to his Twitter handle and shared a picture of them laughing over their discussion. In his tweet, the UP CM applauded Akki for his discussions about various aspects of the film world and for inspiring the youth with his efforts and dedication.

(Today in Mumbai, I met the popular actor of the Indian film industry, [email protected] He had meaningful discussions about various aspects of the film world. His understanding, dedication, and constructivism towards his work is inspiring for the youth.)

Meanwhile, on the work front, Akshay will be seen in 'Atrangi Re' with Sara Ali Khan and Dhanush. He will also star in 'Bell Bottom' and 'Bachchan Pandey'.