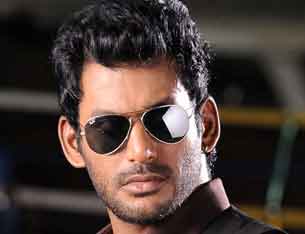 Actor Vishal Krishna fractured his hand while shooting a stunt sequence on the sets of upcoming Tamil actioner "Poojai", but he continued to shoot because he believes injuries spell luck for his films.

The accident happened Thursday and this is the second time he got injured on the sets of the film.

"We were shooting an action scene in Karaikudi. I slipped while diving and to avoid falling on my face, I landed on my hand and fractured it. We didn't stop shooting because I had a doctor and physiotherapist on the sets and they attended to me," Vishal told IANS.

"All those films in which I've got injured have turned out to be hits. It's a sentiment I follow that when I get injured, I think of good things to follow. That's why I didn't stop shooting," he added.

It wasn't long ago that Vishal suffered another injury on the sets of the same film, which is being directed by Hari Gopalakrishnan.

The film also features Shruti Haasan as the female lead.