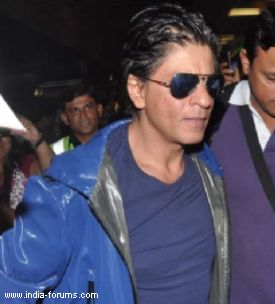 Bollywood superstar Shah Rukh Khan, who was taken to a city hospital following a minor injury that he suffered while shooting a film here Thursday, has now been discharged. He is going back to work, said his spokesperson.

"Shah Rukh got a slight cut on his forehead and he was taken to the hospital as a precaution to make sure there was no serious injury. He is going back to work now," the actor-producer's spokesperson told IANS.

Shah Rukh left the Dr. Balabhai Nanavati Hospital here Thursday afternoon after he sought medical aid for the injury that he is said to have suffered during the shoot for Farah Khan's "Happy New Year".

His wife Gauri Khan was by his side. However, she left the hospital premises a few minutes before SRK. There was tight security outside the hospital.

A source had confirmed to IANS that SRK was in the physiotherapy department of the hospital.

Aditya Chopra Pens a Heartfelt Note on '50 years of Yash Raj ...
7 minutes ago