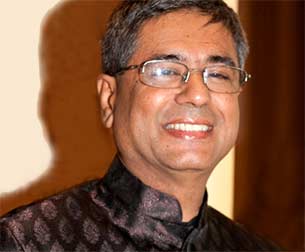 Indian theatre is faring poorly in comparison with theatre across the world primarily due to the mediocrity of state-sponsored regional theatre, says acclaimed playwright Mahesh Dattani.

"It's faring very badly... because the kind of state subsidised or state sponsored theatre that we have is very mediocre, because of the bureaucracy involved and a lot going on that is very unhealthy for artistic growth," Dattani told IANS in an interview.

An out-of-the-box-thinker, the Mumbai-based Gujarati has also donned the director's hat for movie ventures such as the Shabana Azmi-starrer "Morning Raga" and "Mango Souffle" (2002), tagged as the country's first gay male film. He was in the city to conduct an intensive acting workshop organised by art and culture magazine Kindle in association with the iLEAD educational institution and The Corner Courtyard, a newly-opened boutique hotel.

He is the first Indian playwright in English to receive a Sahitya Akademi award.

And to pump fresh life into regional theatre, there's a need for more money, more collaborations and at the heart of it, artistic integrity, says he.

"Collaborations are good...one can learn from marketing techniques...how they (international theatre) can sustain themselves in stiff competition.

Acknowledging that films are "our bloodline", he conceded that while Bollywood can be meaningful, its shallowness has influenced commercial Indian theatre.

Moreover, the ace playwright highlighted the flip side of blindly aping western concepts in theatre, that is, adopting a text-based approach while traditionally it is a rich blend of text, dance, music and drama.

International influences, he said, "are not necessary at all".

"In fact, sometimes I feel they are detrimental. I am not against cultural collaborations but what I am talking about is blind following of western concepts and systems - which is what modern Indian theatre does.

Noting some encouraging trends in Indian theatre, such as its becoming more visually rich - in terms of intelligent use of space and spontaneity - and shifting away from verbosity, Dattani said the surge in numbers of international collaborations and experiments hasn't yielded anything original.

Known for exploring sensitive issues, he dubs recent instances of curbing creative freedom in India as an "unhealthy trend" but also a "backhanded compliment" to the might of art forms in bringing about change.

"I think it is a very unhealthy trend and in a way it's a backhanded compliment to theatre because people are saying that theatre is powerful enough to make a difference and that is why you are bringing in all these restrictions," Dattani added.

"With these restrictions the first freedom that goes is the freedom of expression and the rest follows," said the man behind thought-provoking works like "Dance Like a Man", "Thirty Days in September" and "Final Solutions".

In his tryst with theatre and films, the 55-year-old has delved deep into topics of gender bias, communal tensions and homosexuality among others.

A staunch believer in theatre's power to "reflect society", Dattani said the medium should be channeled to showcase the current scenario of increasing violence against women as well as bring out the "much-ignored" lesbian-gay-bisexual-transgender (LGBT) community.