You are here :
OVERVIEW ABOUT
1
TV SHOWS
28
NEWS DISCUSSION
4
FANCLUB 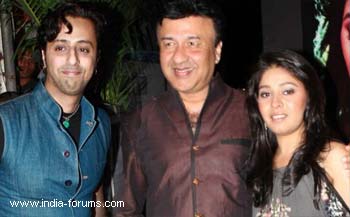 Singing reality show "Indian Idol" enters its sixth season and the three judges - Salim Merchant, Anu Malik and Sunidhi Chauhan - say the focus this time will be on the power of the voice and not on the looks.

Sunidhi feels in a bid to discover a complete package - a mix of good voice and looks - the judges missed out on true singing talents and that is the reason they are not giving much importance to looks.

"Our priority this time is only good voice. That voice has to have a spark and magic which touches the soul. Yes, season five was all about complete packaging, but while selecting that we missed out on some great talents. So this time we thought why not concentrate on voice only as looks can happen gradually with grooming," she told IANS.

Salim of music composer duo Salim and Sulaiman, said: "It is wrong to say that we always look for a complete package as this edition will be only about good singer. The focus will only be on voice."

It is said that over 1.5 lakh participants have registered themselves online for this edition of "Indian Idol", which has earlier discovered talents like Abhijeet Sawant, Sandeep Acharya, Prashant Tamang and Sreeramchandra Mynampati.

Musician Anu Malik, who has been a judge on the show ever since its debut in 2004, said looks can help contestant only if he or she is blessed with a good voice.

"I am not looking for a girl who looks beautiful. If that comes with your voice, it can be an added bonus. But for me voice matters and nothing else," he added.

So far Tripura girl Sourabhee Debbarma has been the only female who won the "Indain Idol" title. She participated in the season four.

Sunidhi said this edition might see more female contestants and added: "So far the number of girls are more then boys and I am happy about it. It's good to see girls are coming out and showing their true power. Hope to get more female winners."

The show will be hosted by Husain Kuwajerwala and Mini Mathur. Though the dates are not finalised yet, but it may replace "Comedy Circus".

10 years ago Its high time talent is recognised and given more importance than mere looks. Hoping IL 6 really has more singers than lookers..

+ 4
10 years ago learn from 'The Voice' where they truly value the voice than the looks!!

10 years ago well abt time to, half of the seasons they rejected good voices saying that are u the idol india looks up?

+ 2
10 years ago i am going to watch it.when is indian idol coming to television?

10 years ago what utter bullshi*!!! They rejected a wheatish, lil round girl with her teeth in dire need of braces though she sung WONDERFUL !!! ZERO CREDIBILITY for this show