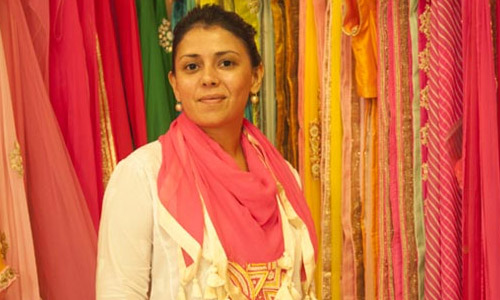 A self-trained designer and an aesthete, Nikasha Tawadey made her debut in the Indian fashion industry in 2006 with her eponymous label 'Nikasha'. The designer feels the industry has grown to a point wherein designers are confident about their own inspirations rather than looking to the West for influences.

"I think Indian fashion has finally started developing a voice... and we (designers) are not scared of expressing themselves anymore. There was a time when we looked up for extension and association with whatever was happening in the west, but I think we are almost on a detachment (phase)," Tawadey told IANS at the Amazon India Fashion Week (AIFW) here.

She finds this growth "very good" due to the confidence that has seeped into the industry.

"By confidence in design, you mean that you have a story to tell... so we all are finding our stories to tell and we are happy," she added.

She says it is veteran designers like Rohit Bal and Rohit Khosla, who set the standards for designers in the country.

At AIFW, which began on Wednesday at Pragati Maidan here, Nikasha showcased a collection titled 'Ruby'.

Taking inspiration from Loulou de La Falaise, a fashion muse and designer of fashion, accessories and jewelelry associated with Yves Saint Lauren, Ruby, as the designer explained is an imaginary girl with Anglo-Indian French roots.

This collection revisited an age of individual style, laidback glamour complete with fringes, kimono shawls, turbans and silhouettes that clunk and clatter.

Asked about her international presence, she said she's looking forward at "doing some fashion weeks internationally", and added that "let it all be fine (fixed), then we will talk about it".

She also has a message for aspiring designers.

"If you have a sincere and strong voice, you will find people who admire and like your work. Look at designers like Sabyasachi, who never wanted to do anything else than what he is doing. I think if your voice is strong, people will admire it."