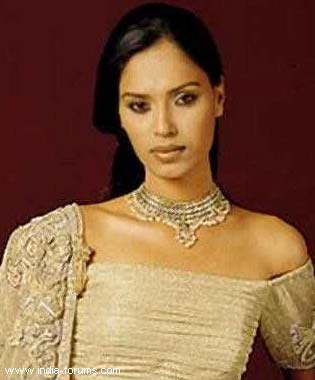 New Delhi, Oct 16 Ujjwala Raut has sashayed down the ramp for international luxury brands like Yves Saint-Laurent, Roberto Cavalli, Dolce & Gabbana and Oscar de la Renta but is hardly seen on the Indian ramp. The Indian supermodel candidly admits money is the reason.

'They (Indian modelling industry) can't afford me; that's why I am rarely seen. Also, my involvement with ad shoots and magazine covers takes maximum time,' Raut told IANS in an interview.

The leggy model shot to fame when she won Femina Look of the Year at the Miss India contest in 1996. She was just 17. The almond-eyed girl was pushed by her elder sister to join this glamorous field.

'I used to be an average looking girl; so I had never thought of modelling as a career option. It was my elder sister who inspired me to get into this field. She was completely fascinated by Madhu Sapre and instructed me to follow her and that's how my journey started,' Raut recollected.

Raut has appeared on the cover of fashion magazines like Vogue, Harper's Bazaar and Marie Claire and was once the face of Yves Saint Laurent. She has also walked the ramp in Milan, Paris and New York fashion weeks.

Unfortunately, India hasn't been able to produce any supermodel after the likes of Madhu Sapre, Milind Soman and Raut. And she blames Bollywood for it.

'The main reason why there is no supermodel left in the Indian modelling industry is the presence of Bollywood which has become an obvious career option for most models,' she said.

'I never tried Bollywood because it requires a lot of attention and time which I won't be able to give keeping in mind my other projects. In future I will definitely think about the same but no plans as of now,' she added.

Currently Raut is on the judging panel of the NDTV Good Times popular reality show 'The Hunt for the calendar girl' 2012 along with Milind Soman and Sonam Kapoor.

Raut feels the most important thing a young model should have is right focus to excel in this business.

'I do what I want to do and I just don't do anything and everything. There are girls who would often say 'You are a model, I want to be a model too!' I would tell them that modeling is not for everybody. You actually have to understand where your interest lies and what you are capable of pursuing as a profession,' she said.

Raut, whose father is a cop and mother a homemaker, believes that the Indian modelling industry has increased manifold but there are miles to go before one is satisfied.

'There is no doubt that the Indian modelling industry is growing but it's still new, while in the West it is very old. In the West, there's much more competition because you are competing with girls from different parts of the world, whereas in India there are just a few girls from outside, rest all are just Indians,' she said.