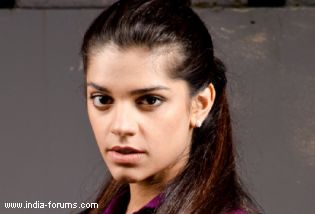 Having immortalised strong women-oriented roles on TV screens across the border, young and multi-faceted Sanam Saeed, known to Indian audiences as Kashaf Murtaza of Zindagi Gulzar Hai, says that while India makes the most of its film making capacity to tell stories, the medium in Pakistan is TV.

The 29-year-old is ecstatic and "grateful" that Zindagi Gulzar Hai, one of the most popular ongoing shows in India, has turned out to be the "first drama to have broken the ice across the borders in current times", Sanam told in her distinct baritone over the phone from Karachi.

"India uses Bollywood, rather cinema, to tell its stories. It is one of the largest film making nations in the world and so your talents get to tell stories about politics, love and drama through films. In Pakistan, our medium is the small screen.

"We don't make many films, and hardly have theatres. A majority of people seek entertainment while sitting at home and TV gives it to them, so we excel on that part," Sanam said, stressing that since their command over language and gift of the gab are "strong", they have some prolific writers.

Shows from Pakistan are high on content and quality and Indian audiences are gradually coming face to face with them courtesy new channel Zindagi - Jodey Dilon Ko, a first-of-its-kind initiative, beaming entertainment and content from that side of the border here.

The line-up on Zindagi channel bears testimony to Sanam's contention.

Her own show "Zindagi Gulzar Hai", based on prolific writer Umera Ahmad's novel of the same name, is a romantic drama focusing on women, portraying equality of the girl child and importance of a career for women.

Another show "Aunn Zara", now over thanks to the finite nature of most Pakistani shows, was based on Faiza Iftikhar's novel "Hisaar-e-Muhabbat" and caught the viewers' eyes as it dwelt on family ties and strong female characters.

As an artiste, Sanam, who was born in Britain and shifted to Karachi with her family when she was six, prefers to pick parts which depict a woman's struggle.

"I've seen the effect some of my shows have had, and so I like characters that can be role models for young girls, roles that can help to change people's perspective."

"The masses. The middle-class masses. The upper middle class here still has options for entertainment. We have internet, Hollywood and books. But for the majority and the masses, there is only TV," said Sanam.

"A lot of them sit at home and watch TV as they can't afford other forms of entertainment. So, we try to do shows which have inspirational value," added the actress, who has played a troubled wife in "Mera Naseeb", a Pakistani British woman in "Mata-e-Jaan Hai Tu" and a Syrian Christian single mother in "Talkhiyan".

Sanam started out by being a model, following which she became a video jockey, did theatre, tried her hand at stand up comedy and is also a singer, apart from being an actress in TV shows and films.

She says three of her past shows will be beamed on Zindagi channel soon.

In a recent interview, veteran Pakistani actress Samina Peerzada, who plays Sanam's mother in "Zindagi Gulzar Hai" told that she is glad that through these shows, India is getting to see a side of their country so far eclipsed by negative news coverage.

Sanam has another view.

"I don't understand why we are considered different. We were one nation. We are not different. In fact, there is so much similarity between us culturally, in terms of food, clothes, family, bonds and language. So, I have never been under the impression that we (India and Pakistan) are different. Nevertheless, I'm glad that the shows are having a positive impact on people in India - it's the same effect that they had on people here (in Pakistan)," she said.

tvluvr 6 years ago you are an amazing actress sanam saeed. keep rocking. ...

Sanaya-hi-Rani 6 years ago Love u Sanam...so right about the Indo Pak thing.

fary5 6 years ago Sanan Saeed u r truely a natural actor!! Love u..

Nels 6 years ago Good to hear ZGH cast's views on the response.

shivani003 9 years ago Love both of them. Dostana rocked! Hope the sequel in future will measure up...

sweet_angel27 9 years ago yay! I love John and it's been a while since he's been in a movie and I haven't seen the first kaante but I'm hoping this isn't a continuation of the first story.

Mohini19 9 years ago Love John, not a fan of Abhishek. It was sad to see how Karan Johar depicted the stereotypical gay characters (or pretending to be gay) in Dostana. Its high time that Bollywood grows up and stop showing gay characters as girly with pink costumes.
Nonetheless, love John. He is adorable.

geet138 9 years ago Can't wait ...I watched dostana at least 5-6 times, I just loved the comedy, truly speaking I just accept gay people like any other in this world...