Q: What is it that took three years to make your debut album?
A: I was doing medicine, then I was caught off with my modeling projects because of which I was not able to do justice with my medical career. So, that was the time when I decided to make an album. And I started working on it.

Q: But you were always interested in music, since childhood …
A: I was always passionate about music, but for my parents sake I thought of finishing my studies first and then pursue my singing career.

Q: With many singers like Rahet Fateh Ali khan, Atif and many more around, where do you see yourself?
A: I cannot compare myself with them because they have already proved themselves as artists and I still have a way to go. Maybe after two albums I will be in a position to see myself in the same league.

Q: Don't you have butterflies in your stomach thinking whether people will accept you as a debutante singer?
A: I feel that Indians have big hearts as far as acceptance is concerned. So if the music is good, people will definitely accept me whole heartedly. 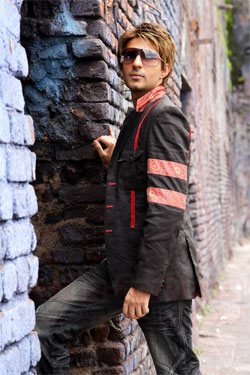 Q: You started off as a model for Pepsi and then you must have got a whole lot of  film and modeling offers?
A: For the next two years I want to concentrate on my singing career. But I do want to act in Bollywood.

Q: Why did you want to make your debut in India?
A: Because I was always fascinated by Bollywood and the Indian music industry. Out there in Pakistan, Bollywood has a huge following. Here in India artists get more mileage as compared to Pakistan.

Q: Was it difficult to make it in India?
A: Of course, initially I had to struggle a lot. But I guess I have learnt a lot from the struggle.

Q: You made a band called ‘Rooh’ when you were in college, tell us about the band.
A: The band was made when I was a kid. But we made some great music at college level and then everyone in the band had to move on to pursue their respective careers.

Q: What kind of music do you personally like?
A: The music which sounds good to my ears is my favorite. Personally I like Nusrat Fateh Ali Khan Saab, Shaan, Sonu Nigam and Shanka-Ehsaan-Loy.

Q: Which song is in your mind currently?
A: The song ‘Maa’ from ‘Taare zameen par’ really gives me goose bumps whenever I listen to it.

Q: Was your family supportive when they came to know that you wanted to make it big in India?
A: Initially, when I dropped my career in medicine they did not like it. But after seeing my passion for music they adjusted and by God’s grace they supported me. It would not have been possible for me to reach here without their support and encouragement.

Q: How has been your experience in India so far?
A: I really had the time of my life in India, especially in Mumbai. I am thrilled to see the level of energy Mumbaikars have. Personally I feel that India is my second home.

Q: Do have any plans to settle down in India?
A: Why not? If things do work out then is no harm in settling down here.