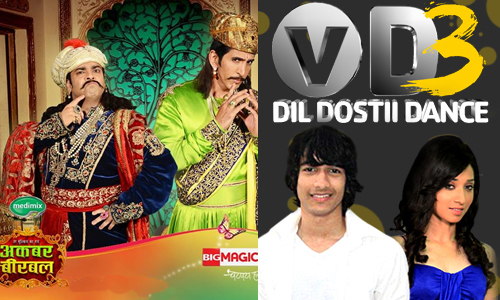 As we will be celebrating our 67th year of Independence, the feeling of patriotism and humanity has already imbibed in us. With the day approaching, our TV shows are also doing something special to make the viewers realize the importance of the Day. While TV shows are projecting many social issues, they are highlighting the importance of the Independence through these youth driven as well as comedy shows.

Like in Channel V's Dil Dostii Dance the senior team of D3 Swayam (Shantanu Maheshwari)  Sharron (Vrushika Mehta), Vicky, Bharat, Nilesh, Simmi will give a performance on a few patriotic songs in the college. Similarly Big Magic's comedy show Akbar Birbal is performing a skit with all the actors Delnaaz Irani, Vishal Kotian, Kishwer Merchantt who will give a performance  portraying the difference between today's era and the era before independence. They will try to convey the difference between Mughal's Era and Today's Era by there performances."

Well quite an interesting thought of depicting the importance of the Day!

bianca04 6 years ago Love you vrushan

.One of the best couples

.CoffeeStains. 6 years ago Love u Vrushika Mehta and Shantanu Maheshwari.

LilBitOfAlexis 6 years ago love u Vrushika Mehta and Shantanu Maheshwari