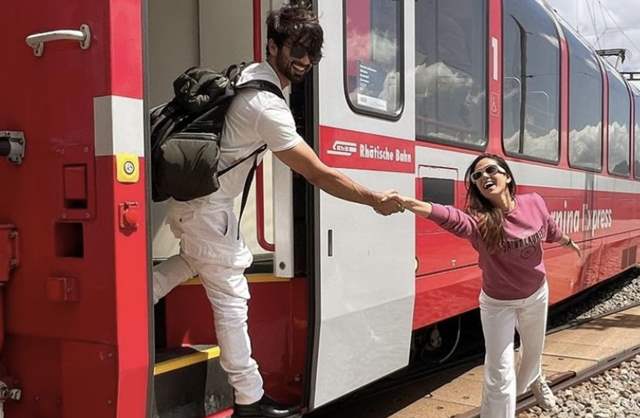 Shahid Kapoor and Mira Rajput's Europe vacation was making  headlines for the past few days and the mushy pictures of the couple reinvented the definition of togetherness and inspired many couples out there.

A few hours ago, Mira Rajput shared yet another joyful throwback photo while revisiting old experiences in Switzerland with her husband Shahid Kapoor.

Going down memory lane, she shared a photo from a train station that instantly brings to mind the famous sequence starring Shah Rukh Khan and Kajol in Dilwale Dulhania Le Jayenge. She also included a photo of herself that was snapped during the train ride.In the pictures shared by Mira, Shahid Kapoor was clicked posing for the camera while sporting an all-white ensemble.

He took Mira's hand, who was grinning broadly. The Swiss Alps may be seen in the backdrop of the photo as well. In yet another picture, Mira was seen sitting in the train posing for the lens. She  was decked in a salmon sweatshirt and off-white pants.

With their children Misha and Zain, Mira and Shahid were vacationing across Switzerland. They were later spotted in London. This month, the couple celebrated their seventh wedding anniversary. On Instagram, Mira and Shahid shared posts specifically for one another and showered love upon their better halves.

On the work front, Shahid Kapoor has collaborated with Ali Abbas Zafar for a thriller, 'Bloody Daddy'. It is touted to be a thrilling film with drama. He will also mark his OTT debut with Raj and DK's web show Farzi which will premiere on Amazon Prime.

+ 8
2 months ago i thought she didnt watch bollywood movies.