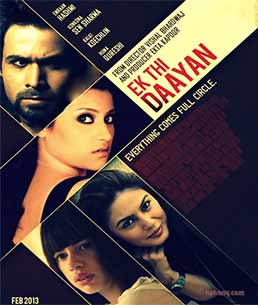 "Ek Thi Daayan" marks Konkona Sen Sharma's maiden tryst with horror genre and she is happy to collaborate with Vishal Bharadwaj and Ekta Kapoor for the movie. She says her character has mysterious relationship with co-star Emraan Hashmi.

The National Award winning actress was on a break for some time and she was last seen on the big screen in a brief role in Bharadwaj's 2011 black comedy "7 Khoon Maaf", based on Ruskin Bond's short story "Susanna's Seven Husbands". She had worked in his "Omkara" too where she had an important role to play.

"I am very excited because I am coming after a long time as I had a baby. Now my baby is a little older and I have come back with quite an interesting film," said the actress who gave birth to her son in 2011.

"This is the first time I am doing horror and I am collaborating with some great people like Vishal, Ekta, Huma (Qureshi), so I am very excited about it," she said.

"There is so much collaboration with such great talent together... like who wouldn't want to work with Vishalji? I really want to work with Balaji (Ekta's Balaji Motion Pictures) as well. Besides, my father has written a short story 20 years ago on which the film is based upon," added the actress whose last full-fledged role was in "Mirch".

The 33-year-old, not willing to reveal much about her character in the film, said: " My relationship with Emraan is a very mysterious thing. Emraan has to deal with evils on many levels and that's it. I am not allowed to talk about it."

Directed by Kannan Iyer "Ek Thi Daayan" also features Kalki Koechlin among others and it is slated for a April 18 release.