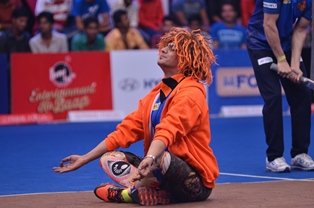 Imam and trouble go hand in hand!  Just yesterday we had reported that how he made a so called lucky appearance for his team Chandigarh Cubs in an outfit which was so horrendous even his team mates were taken aback. But Imam can't be stopped at just shocking people in orange hair.

'Taking his lucky mascot' badge a little too seriously he  decided to cheer for his team directly from the commentator box. This antic of his irritated opposition team Jaipur Raj Joshile Kamya Punjabi to no end. She insisted on Imam being thrown out of the stadium or her team won't resume play.

Well Imam, seems like you are pushing you luck a little too far with your attention seeking habit!