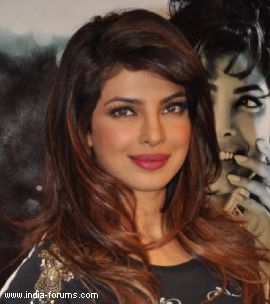 Priyanka Chopra rarely comments on her love life. She says it has nothing to do with being "politically correct".

At the Agenda Aaj Tak Conclave here Thursday, Bollywood's eligible bachelorette was asked why she has never stood up and spoken out against dating rumours.

"It's not because I am being politically correct. It's just that I'm a private person," said the 31-year-old.

"I believe that I am putting 90 percent of myself and my family life out in front of the public, I have every right to keep 10 percent of it for myself," she added.

Priyanka, who is also an active member of online social networking platforms, says women always know "how much you want to tell".

"I am a girl and I have the right to keep my personal life personal," said the star of films like "Dostana" and "Barfi!".

A session with Priyanka will be incomplete without a question of her marriage plans, and the story was similar at the conclave.

She said: "When somebody who is worth asking me asks me about marriage, then I will see."

The actress, who is also making a name for herself as a singer on the international music scene, is sure that she wants two key things in her prospective partner - "he should be my best friend and I should have 'aankhon ki sharam (a degree of respect)' in front of him".