New Delhi, Aug 17 (IANS) Actor Suniel Shetty says that he's doing fewer movies these days because he hasn't got any exciting offers, not because he has become finicky about roles. 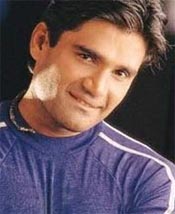 Featured Video
'The truth is that since the last year or so, I haven't got good film offers at all. Trash was coming to me in the name of scripts. I am not insecure that I would go for any role. I'm in a position now that I don't need to compromise,' Suniel told IANS in an interview.

The actor also talked about the nearly two-year break he took from films.

'I took a sabbatical for a year and a half and that is when people in the industry realised my worth. I have some good films now, both as an actor and a producer, and I am very happy.'

Suniel turned producer in 2003 with his own production banner 'Popcorn Motion Pictures'. His first two productions were 'Khel' and 'Rakht', which turned out to be box-office duds.

He then took a much-needed break and returned with comedy film 'Bhagam Bhag' in 2006 that turned out be a big hit.

Though his latest venture with Apoorva Lakhia - 'Mission Istanbul' - did not fare well, Suniel said that he had no plans of quitting as a producer.

'Popcorn Motion Pictures is my obsession. I started my career as a businessman with a restaurant and garment business. But Suniel Shetty - the businessman - can take over only movies and not any other venture,' said the actor who was here to launch his fashion apparel house 'Crossover Bollywood Se'.

Suniel, who entered filmdom as an action hero with 'Balwaan' (1992), feels that the dynamics of action in films have changed over the years.

He said: 'Action has risen to a different level. Today it is mostly special effects. We used to perform our stunts on our own and today the actors use all kinds of props. There lies a difference between men and boys now.' 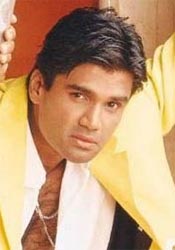 But the 47-year-old actor, known for his macho image, couldn't stop praising the women who performed daring stunts in action reality show 'Fear Factor: Khatron Ke Khiladi' that was hosted by Akshay Kumar.

'After watching the show, I think guys should stop talking about action and start getting inspired from women,' he remarked.

Asked how he had evolved as an actor over the 16 years he's worked in Bollywood, Suniel said: 'I've learnt a lot. Today I understand my character. I have tried my hand at everything from action, romance to comedy. I'm the only actor to have worked with over 90 directors and different roles.'

He added: 'Money comes last and self-respect comes first for me. I want to have goodwill in the industry. I'm only looking forward to people appreciating my work in the future.'

His future projects as a producer include 'EMI', 'Mumbai Chaka Chak' and 'Loot'.

And as an actor he would be seen in films like 'Paathshaala', 'Chai Garam', 'Blue', 'Daddy Cool', 'Red Alert - The War Within' and 'International Hera Pheri'.