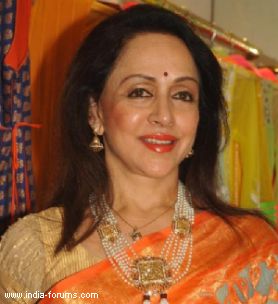 Bollywood's Dreamgirl Hema Malini, who has won the Mathura parliamentary seat on a Bharatiya Janata Party (BJP) ticket, is determined to prove all the cynics and smirkers wrong. She says she's not in politics to "pose for pretty pictures in beautiful saris", but to bring "changes needed in the way the constituency is run".

"They were making fun of me because they thought I was just here in Mathura to pose for pretty pictures in beautiful saris.

"They forgot that I've spent six years in the Rajya Sabha before attempting to contest the Lok Sabha elections. So I am not only a glamorous star whiling away my time," said the veteran actress.

"Now those cynics will sit and watch my performance. They will say, 'Let's see what she does.' Well, all I can say to them is they will get to see a lot of me in Mathura," she added.

The actress, who celebrated her victory with her daughters Ahana and Esha, feels her physical presence in her constituency is not enough.

"It would be simple enough for me to visit Mathura once a month. But that isn't enough. There's work to be done and many changes needed in the way the constituency is run," said the 65-year-old.

She doesn't deny that the Narendra Modi wave helped her win.

"Of course the wave gave an edge to all BJP candidates. I won because of Modiji. But the wide margin by which I won was because of my own personal standing in the constituency.

"People in Mathura knew I was there with a serious agenda. Now I need to prove myself," she said.

She feels the entire nation is watching her party.

"Everyone has great hopes from Narendra Modiji and all his party members like me who have been elected. We can't afford to let them down."