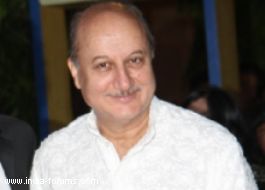 Veteran actor Anupam Kher is teaming up with his son Sikander on the big screen for Chandan Arora's new film, and says he is kicked about working with him.

"It is a brilliant script that we are working on. But unfortunately, there is only this much I can reveal about the film as of now," Anupam told IANS.

Sikander made his Bollywood debut with "Woodstock Villa" in 2008. He went on to do films like "Summer 2007", "Khelein Hum Jee Jaan Sey" and "Players", but none could rock the box office.

Is Anupam excited to work with Sikander?

"Yes, absolutely! I am looking forward to work with him. I love the idea of working with young people and newcomers. In fact, in the past five years, my maximum work has been with young and fresh people. I'm sure this film will be great too," said the 57-year-old.

In the meantime, he is kicked about the Asia premiere of his international film "Silver Linings Playbook", which will open the forthcoming Mumbai Film Festival, starting Oct 18.

The critically acclaimed Hollywood comedy-drama boasts of a well-known cast - Jennifer Lawrence and Robert De Niro. It has received its fair share of acclaim at the Toronto International Film Festival.

On behalf of the team, Anupam will present the movie at the film gala in Mumbai.