Karan Singh Grover is finally back to Star One's Dill Mil Gaye. And here is Karan talking exclusively to Telly Buzz on his return to the show, on the probable track ahead, his future plans and much more…

Over to Karan Singh Grover… 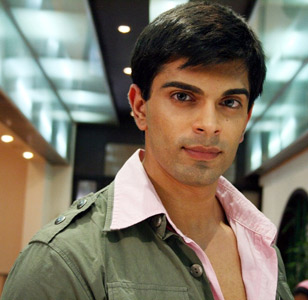 How is it to get back to Dill Mil Gaye?
It's really awesome to be back. I'm just so astonished to see that the crew has built such a huge set for my comeback episode. I feel like I have come back home after a long time. All my prayers and your prayers have been answered (smiles). So I'm back.

When did you decide to make a comeback to the show?
My come back on the show was confirmed even before my exit episode. But only the exact episode wasn't decided. We've been working on the story-line for quite sometime, and now finally we mutually decided that this is the right time for me to come back.

According to reports, you were in talks with the channel and production house from a long time, and you were to get back exactly during Riddhima and Sid's marriage. Why did that not happen?
Actually at that time there were lot of speculations about my come back. But if I would have entered at that time then there wouldn't be anything new happening. So we thought that when Riddhima fosters some feelings for her husband (Sid), that will be the right time for her true love (Armaan) to come back. This would create real drama.

How is it to get back working with your co stars in Dill Mil Gaye?
It's a great feeling to get back. But not all are there from the previous batch except for Jennifer (Riddhima) and Pankit(Atul). We all have been friends for a long time now, and I hope they also come back on the show.

What do you have to say about the new interns who are now part of the show?
I have met the new interns too. They all are a cool bunch of people and they have done a fantastic work on sets during my absence, and I hope it continues.

Are you aware that your fans sent out a huge petition to the channel and production house to get you back?
Yes, I'm very much aware about it. I have been receiving lots of messages on personal level through social networking sites like facebook, my personal blog site. Fans have even posted letters at my house, even the Cinevistaas team has been informing me of it. I'm really touched to know that my viewers missed me a lot. And trust me I really wanted to come back too.

Explain to us Armaan's comeback track or scene.
Basically, now that Riddhima is married to Sid, she has also started liking him. But after Armaan's comeback there would be a love triangle happening. As a character I don't blame Riddhima for her choice because, as I was away for a long time, she was left with no option but to move on. The further story is not yet decided, but we can always say that we like to show what the viewers like to see.

Viewers will no longer see Armaan and Riddhima chemistry as Riddhima is now married. So what is your take on this.
In television industry or any industry for the matter of fact, the producer always tries to deliver what the audience likes and wants at the end of the day. So if the viewers want to see Riddhima and Armaan's on screen chemistry, then let's just hope for the best.

So does it mean we will see sparks flying between Riddhima and Armaan now?
See, actually nothing is yet decided, but surely there would be a love triangle happening. And Armaan and Riddhima's love story or their feelings for each other is like never-ending in DMG.

Is it true that you have signed for Zara Nachke Dikha the reality on Star Plus? Will you be hosting it or taking part as contestant. Confirm.
Aah..! That's a suspense though (smiles). Dancing has become my new passion these days, even though I'm not that good at it. Still I'll be taking part as a contestant in the show and not hosting it this year. However, the channel hasn't confirmed that to me yet.

What were you doing in your break?
For the last five months, I have just been vacationing in Goa and Delhi. This is the longest break I have taken since the last four and half years. I have been busy with DMG, Jhalak Dikhlaja and Zara Nachke Dikha. It has been non-stop work for me for a long time. So it was a much needed break.

Why did you plan to get back to DMG and not take up a brand new show?
DMG is very close to my heart, the youth spark in this serial just keeps me attached to it. I have put all my heart and efforts to give my best to this show. And I have always been telling my viewers that if I do television, then I'll surely be doing DMG; it's not that I'm not open to other offers but DMG would be my first priority.

Do you really feel that Armaan-Riddhima chemistry is much more than what Riddhima-Sid chemistry is?
If I say anything right now then it would be a very biased answer.  I think we should leave it the audience to decide. (giggles)

Will you also want the show to end with a Riddhima Armaan union, just like your fans feel?
I would like the show to have a happy ending. Hopefully it doesn't end very soon. Ya, it is true that a happy ending leaves one with a happy feeling. And people like it that way.

Tell us about the ups and downs in your personal life? How is life after filing for divorce with Shraddha?
I think every person has some ups and downs in their lives and I tried dealing with it the best way I could. I understand that my fans are concerned and care about me and want to know more of it. But at the end of the day, it's my personal life and I want to keep to myself.

What are your future plans when it comes to television?
I don't plan anything, I just accept life as it comes. Right now there's lot of things happening around, DMG and Zara Nachke Dikha Season 2. So I'll be busy again all day long.

What are your plans when it comes to Nicole and your apparent relationship?
No comments.

What about reports that you had an affair going with Jennifer too?
No comments.

What is your message for India-Forums members?
Guy's at India-Forums, you'll are the coolest people in there. I have read almost all the blogs and messages that you people have sent across. In fact my Dad and family members read a lot of it on regular basis. I'm really touched by all your messages and as I always say, "I'll keep entertaining you as long as you'll continue loving me".

KsgJennyAngel 9 years ago Love u ksg & jenny. Plz work together and burn the screen again.

ksgforever10 9 years ago plzzzzzz dnt go nd leave us we cnnt lv wdout u nd dmg we luv nd plzzzzz do cm as an anchor nd a contestant in jdj nd nach baliye hope 2 c u in future nd i wll keep on lvng u .....muuahhhhhhhhhhhhhhhhhhhhhhhh

KSFAN123 10 years ago What are your plans when it comes to Nicole and your apparent relationship?
No comments.

You guys are together since long back, i found just recently & u were always with nicole after JDJ3, u celebrated ur bday with nicole this year also. ..wow i thought u were sad about divorce, well thats what every1 said & i believed, glad u were happy, but i guess u can thank shraddha for this, coz shraddha asked for divoce & u didnt, though i wish u did ask first coz then urs & nicole's relationship wont seem wrong, but anyway hope she keeps u happy, but please understand that its hard for me to like nicole in place of shraddha, so do help us like her the way we luved shraddha for u, images of JDJ3 keep coming in my mind & keep saying that no ksg can never be like this & nicole is a great woman & would never destroy someone's marriage, but i guess i was wrong, wish u & nicole best, nicole made her relationship official, i think soon all will know....im still in shock, hopefully i will get over it, but still shocked ksg! cant believe how nicole betrayed shraddha's friendship, that lady never missed chance to praise nicole & ksg & did not even blame nicole for divorce, she didnt take ur money or nothing, but left u for ur happiness ksg, miss my KS, if shraddha didnt make u do JDJ3, life would be awesome today without nicole, oh well ksg-nicole both deserve to thank shraddha at least, she luved u guys alot & moved away from u both for ur happiness & scarificed her dreams she had with ksg, nicole how is ur heart going to accept to make ur own house over a house u destroyed.
Now i know why dancing was ur new passion, coz of nicole!

Gloriosaa 10 years ago AR deserve to be together... Riddhima should follow her heart and choose her love Armaan. In the last two and a half years, we have seen undying love of AR and also they've face more problems than happiness. They have gone through a lot of hurdles which make their relationship more stronger. Pls reunite AR….

Fariha01 10 years ago I love you..i want to see you back with ridz in dmgg...and keep away the sid from ridz as much as you can lol..your doing a great jobbbbb nd i hope that i will see u nd ridz union in the end of the show...loveeee youuuuuuuuuuuuuuuu