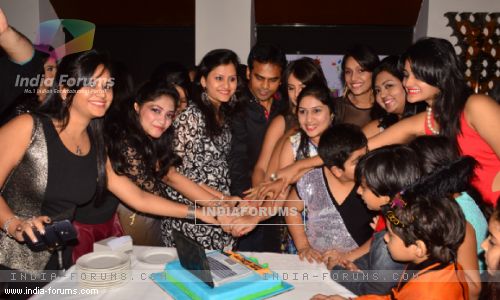 The floor was dazzling and it was a starry night for the TV celebs who made their presence felt for the success bash of India-Forums (an entertainment portal) for completing 11 glorious years. Many celebrities attended the party, popular TV celebs joined in and made the bash a grandeur, this year too.

Yes, it was the time to Disco and many stars showed up for the night by donning the glaze ad glittery attire to match up with the theme. Among the popular celebs, the first one to arrive was Ayaz Ahmed who merely made his presence felt at the party for a short time but left early because of his prior commitments. Actor Ashiesh Roy along with his friend was the second guest to arrive and grace the occasion. It was extremely overwhelming to see producer Dheeraj Kumar greeting everyone present at the party. Veteran actress Usha Nadkarni, was seen wearing a simple black dress yet was looking pretty. She enjoyed herself at the party and utilized the props to the fullest. 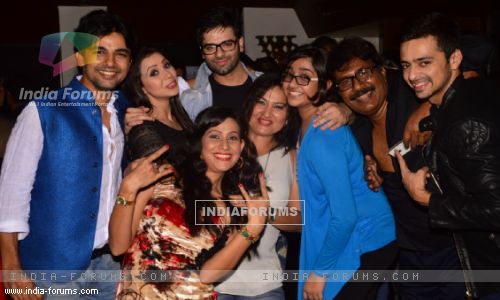 Actor Raj Singh who came along with his girlfriend, Shalini Shauta was extremely pleased to see his on-screen Mother Usha Nadkarni. This mother-son duo was very happy to meet each other after a long time. The actors captured these wonderful moments in their lenses by clicking selfies with their buddies.

Coming to the bacchas of our TV industry, popular child actors Divyam Dama, Palak Dey, Dhriti Mehta, Yash Ghanekar, Faisal I Khan, Ashnoor Kaur, Sadhil Kapoor, etc. enjoyed themselves with full zeal and zest and ensured to look the best with the props and in the selfies. These bacchas rocked the dance floor with their moves on many foot tapping songs.

Actress Manasi Parekh who was looking spectacular in her black and white attire was seen mingling with her good friend Sushant Singh.

Adding more to the list was Telly town's cool hunk Siddharth Shukla who made his presence at the party a little later and mingled with his friends. The team of Ye Hai Mohabbatein was in a jovial mood as the actors Diyvanka Tripathi, Abhay Bhargav, Kaushal Kapoor, Mihika Verma, Anurag Sharma, Shruti Bapna, Shireen Mirza danced their hearts out. 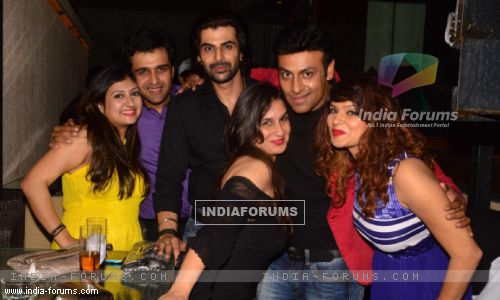 Well it was quite commendable to see that a few actors like Sadhil Kapoor, Ridheema Tiwari, Rashmi Pitre, Rithvik Dhanjani, Akhlaque Khan, Monica Khanna, Ashnoor Kaur, Pooja Gor, Raj Singh Arora, etc. matching up to the theme and were looking quite stunning in their attires. The glitzy and glittery dresses enhanced the mood of the party.

Actor Anupam Bhattacharya too was seen mingling with his long lost friends of the TV industry.

Vindhya Tiwari wore a slit black color gown with a silver glitter in it was looking excellent among the show Diya Aur Baati Hum's cast. The cast of the show, Ashok Lokhande, Rashmi Pitre, Pooja Singh, Varunn Jain, Karan Goddwani, Gaurav Sharma etc. clicked a selfie and pepped up the mood of the party.

Friends forever Roopal Tyagi, Pariva Pranati and Puneet Sachdev graced the occasion late into the night. Roopal managed to take time out from her busy schedule and arrived at the party. Later Roopal was seen mingling with her co-actor Mahima Makwana and friend Karan Sharma.

Young actress Mahima Makwana came along with her mother, was dancing on the beats of  very popular songs along with Helly Shah, Roopal Tyagi, Karan Sharma and more. Helly Shah got along well with her friends and was seen rocking the dance floor with her moves. Another young actor Faisal I Khan who was accompanied by his father, was seen mingling with Aashka Goradia who was his co-actor in Maharana Pratap. 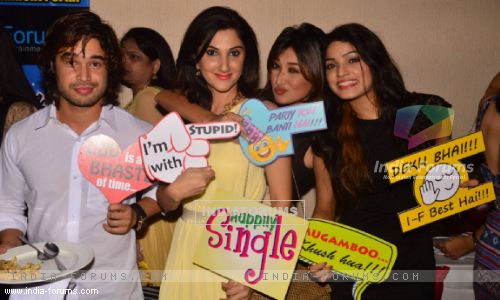 Adorable Giaa Manek entered the venue in a black dress and was seen chit chatting with Monica Khanna, Adaa Khan and few more. This gang of girls enjoyed the party and danced on the beats. Rishika Mihani looked sporty and gelled with her friends at the party.

The moment arrived when the success was celebrated with a cake cutting ceremony and the TV celebs gathered to be a part of this joyous occasion. The mood of the party was enhanced  when the producer Rajan Shahi with Kanchi Singh, Nikita Agarwal, Waseem Mushtaq of Aur Pyaar Ho Gaya, too joined in for the bash.

Well this is not all, the most energetic person was actor Bhanu Uday who was accompanied by his wife Shalini Khanna and set the dance floor on fire. Apart from Bhanu, Karan Suchak too enjoyed the party.

6 years ago You have the Most Scintillating Smile in this universe Siddharth Shukla ...I love you so much !!
Its good to see you had so much fun at the IF Anniversary Party :)

madhvi97 6 years ago SIddharth Shukla good to see you having fun moments! Keep rocking, love you.

+ 3
6 years ago Siddharth Shukla good to see you catch on with your good friend Karan. Good luck to you, Pratyusha Banerjee.

6 years ago MANISH RAISINGHAN luv u so much!!! Keep rockin.

6 years ago MANISH RAISINGHAN u rocks!!! Luv u so much. Keep goin...

madhvi97 6 years ago Handsome hunk Siddharth Shukla nice to see you rocking the party!! Congratulations IF

+ 4
6 years ago Love you Siddharth Shukla! And happy bday India-Forums