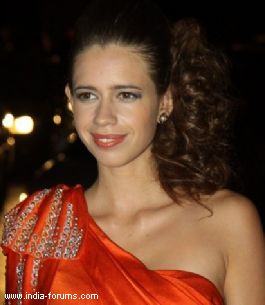 Rumours can't be taken seriously or they would drive a person crazy, feels Kalki Koechlin.

She rubbished reports that she stayed out of "Ek Thi Daayan" promotional activity because of her co-star Huma Qureshi, who was allegdly having an affair with her filmmaker husband Anurag Kashyap.

"I don't understand these rumours. I have been shooting for my film. I had an intense schedule, so I couldn't join them ('Ek Thi Daayan' team) for the promotions. For the last 12 days, I have been promoting non-stop for the film with Huma and Emraan Hashmi," Kalki told IANS.

"As a person, if I take every rumour seriously, I would be in a mental asylum. I just have to ignore it and move on," she added.

Kashyap introduced Kalki to Bollywood with his successful film "Dev D" and later the two dated each other and their love story culminated into marriage in 2011.

Kalki says they are very happy together.

"It's great. We both are getting very, very busy. We have to find time to spend with each other. We are very happy with each other and both of us love our jobs," she said.