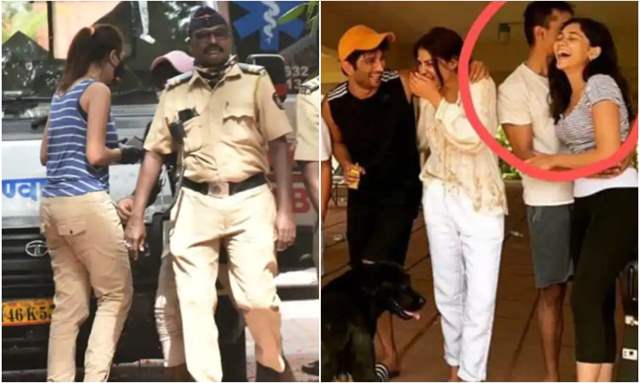 Sushant Singh Rajput’s death case witnessed a new turn after a recent video of a masked woman entering the actor’s building on June 14, 2020 the day he died went viral. News channel Republic TV accessed a video that shows a woman dressed in a blue and white striped shirt entering the building where SSR used to live and talking to a man dressed in a black shirt.

In the video, a man was spotted standing next to the mortal remains of the late actor, holding a black bag in his hand. The man is later seen bringing the bag downstairs. Interestingly, a girl in a blue and white striped dress is also spotted entering the premises in Mumbai Police's presence. The girl then is spotted talking to the man dressed in the black shirt with the black bag. However, the bag in question goes out of sight later.

While the man dressed in black was later identified as Sushant’s manager Dipesh Sanwat, the identity of the woman was still a mystery.

And as per the recent reports in Zee News, the identity of the mystery woman is revealed. The mystery woman who visited Sushant’s apartment on the day of his demise was Rhea Chakraborty's brother Showik Chakraborty’s girlfriend Jameela.

The reports adds that as per Mumbai Police sources Jameela visited Sushant’s house on June 14, 2020, with his other friends Priyanka Khemani and Mahesh Shetty after hearing the news of his untimely demise.

SSR’s family lawyer had questioned the identity of the woman who visited the residence in the presence of the Mumbai Police and what happened to the black bag that could be seen in the video. The lawyer was quoted saying, “If there is somebody from the house is seen moving something it is suspicious. If he is talking to some girl and then she disappears, it is very suspicious. The identity of the girl will have to be found out.”

Meanwhile, Sushant Singh Rajput’s death case has been handed over to the CBI and the Enforcement Directorate (ED) is investigating the money laundering angle after Sushant’s father K K Singh filed an FIR against Rhea Chakraborty, brother Showik and their father Indrajit Chakraborty for abatement of suicide.