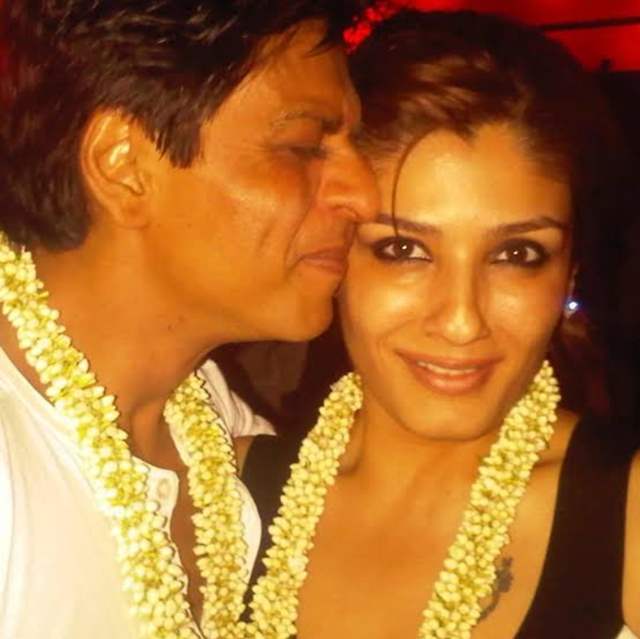 The King of Bollywood - Shah Rukh Khan has worked with some of the most beautiful actresses of all time. Without a doubt, his charm attracts them. But is King Khan in admiration to his female co-stars?

Raveena Tandon, who recently graced the sets of The Love Laugh Live Show and during is Q&A session the actress revealed how SRK thinks she’s “the best-scented heroine”.

Every time we are together, socially or somewhere, he (SRK) tells Anil (Thadani, Raveena's husband), you have the best-scented heroine as your wife. He says, 'Every time when I used to work with her, I'd usually come close and take a sniff of her scent.’

Raveena and Shah Rukh were seen in director Ramesh Sippy’s 1995 release, Zamaana Deewana, and the hugely delayed Yeh Lamhe Judaai Ke, which finally saw the light of day in 2004. Even today SRK and Raveena share a warm relationship.

Raveena has given up acting as her profession as she occupies her time these days by judging various reality shows.

Meanwhile, SRK is busy keeping us on tenterhooks over the confirmation of his next film. The actor has been recuperating from the failure of his last film - Zero suffered.

Revealed: Disha Salian's Sequence of Events On The Night Of ...
14 minutes ago

Meet The Returning Girl in Vansh's Life in 'Ishq Mein ...
27 minutes ago

Rhea Wanted to Put Sushant in a Mental Hospital; Call ...
50 minutes ago

Sushant Confronted Rhea in November after Realizing She was ...
an hour ago

Bombay High Court permits Actors above 65 to Resume ...
an hour ago

Jacqueline Fernandez gives a shout out to Marathi film ...
2 hours ago