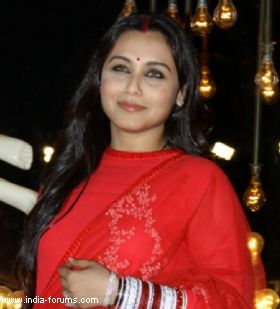 Ever since Rani Mukherjee married Aditya Chopra, there were rumours that she would lead the Yash Raj production house. Rani, however, Tuesday said she would rather take over the house than the office.

"There is a lot of power in the house and especially in the kitchen. In the production house, there are many capable people who take care of everything. Adi being at the helm, I don't think he requires anybody else. I would rather take over the house and not the office," Rani told reporters during the trailer launch of "Mardaani".

The actress said that even after marriage she should be addressed as 'Rani Mukherjee'.

"My name has not changed, so you all can call me Rani. I would like to be addressed as Rani only. I love my name so I will stick to that. For my films, people know me as Rani and they will always know me as Rani Mukerji. When I admit my children in school, I guess I will change my surname. But for my fans, it will always remain Rani Mukherjee."

While Aditya Chopra is known to be media shy and doesn't like to face the camera, Rani said he was an individual and likes to maintain his privacy.

"We are always together. We do go out together, but as a person he has made a very conscious decision to concentrate on his work rather than being seen. That's his decision and I don't think that after marriage, it will change.

"Marriage makes you a different person. Although he is married to an actor, I don't think he is entitled to become media savvy. He is an individual and would like to maintain his privacy. As long as he is visible to me, I am very happy," the 36-year-old actress said.

On her latest film "Mardaani", Rani said: "There has been a strong message for women in most of my films. I am very happy that this role came my way. It was an interesting role to play.

"When I did research and met many women inspectors, I took inspiration from them. This is a way to say what are the contributions of women police officers in our country. There are female officers not only good as male officers, sometimes even better. We have to change the perspective of how people look at a women police officer. This film is one step towards that change," she said.

"Mardaani" has been directed by Pradeep Sarkar.