Albeit Akshaye has garnered his fame as one of the moodiest actors, he has also been known as loved by names like Priyadarshan, Abbas Mastan and Anil Kapoor. Whether as a character artist, a comedian or portraying negative persona, Akshaye has proved his prowess as an actor at every possible field. After playing negative in his last film Race, Akshaye is all out to tickle the funny bones of his audience with his character in forthcoming flick Mere Baap Pehle Aap.

Q. How did you react hearing the title of the flick?
A. I guess this is the best ever title that my films have ever had in my whole career. It’s completely in accordance with the story of the film. Gaurav is the name of my character in the film and he always gives his father’s happiness the first preference. He tries doing anything for making his father happy.

Q. How would you like to describe your character Gaurav?
A. He is simple city dweller who prefers his job. He has a shopping mall and a loveable father. Genelia once asks me in this film, “Whom do you have in your house besides your father?” I reply, “Yeah, I have. I have uncles and unties, grandpa, grandma and they all come together in one human being and he is my father.”

Q. How do you sign all Priyadarshan films so blindly?
A. There are very few directors in Bollywood who knows about using actors in their respective positions. No actor can do anything alone and he always needs a director who can use the actor properly. Priyan is one suc 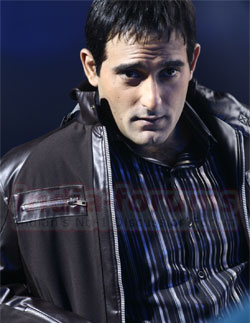 Featured Video
h director who knows that very well. In the same way Abbas Mastan, J P Dutta and Farhan Akhtar also come into the same category of directors who can use me properly. It’s actually the same way as Karan Johar knows to utilize Shah Rukh Khan or Rakesh Roshan knows about placing Hrithik at his best. Priyan has the best contribution in my career. That’s how I always feel for his films.

Q. Have you ever rejected Priyadarshan’s film?
A. Yeah, there have been many times. But a good director never takes these things to his heart. As a director he knows very well that until and unless an actor can be convinced with the character, he never can portray it on screen. I am happy that Priyan knows it very well. We still don’t bother about any kind of formalities.

Q. This one is your fourth film with Priyadarshan. Have you witnessed any change in him as director?
A. Nothing. (Laughing) yeah, one thing is that he has become little older. Actually, his preparations are always very strong. He is so good in explaining his point of view to his actors that they face no problem understanding and depicting their characters. He is very good a speaker. Most directors lack only this ability. Most of the time they know everything but cannot make things clear to others. The result is, actors get more and more confused. But Priyan knows how to make things clear for actor with just a single line.

Q. How your present film is different from other Priyadarshan films?
A. It’s absolutely different. When the story is different then every other thing has to be different. But Priyan style is still there. Audience has well accepted his comic style and I believe that people will love this film also. People have already witnessed lot of stories on father and son relationship but this story is really different where son it life the father and father is like the son. Father always is under guidance of his son.

Q. What’s the most important part of this film?
A. The most interesting part of the film was rebuking Paresh Rawal. Because, in my real life, I would never have chance to scream at my father. I think audience will have a great chance to watch a feel good movie after a long gap. You will certainly feel better with everything around you after watching the film.

Q. Priyadarshan, Abbas Mastan and Anil Kapoor believe in your acting ability. Do you feel pressurized because of that?
A. Not at all.

Q. Getting little personal, how is your personal relationship with your father?
A. My father is more friend than father to me. He is such a man who never imposes any of his decisions on anyone else; it may be his children or his wife. He accepts people from the core of his heart. Believe me; I have met more than thousand of my father’s friends. He is really a social being.

Q. What’s the reason that you are still a bachelor?
A. The answer is ‘freedom, freedom and only freedom’. I have no interest in marriage and I will never get married. I think I must not be answerable to anyone. I neither like to reply to anyone nor do I like to enquire anyone.

Q. Please tell us about your forthcoming films.
A. Along with Mere Baap Pehle Aap, there are films like Anil Kapoor’s Shortcut and an animated film Ab Dilli Door Nehi. I have dubbed for this film. It was a completely different experience from usual acting schedules.

Q. Would you like to start your home production once more?
A. Not now. But, if I get really good story then will love to be a producer for that.