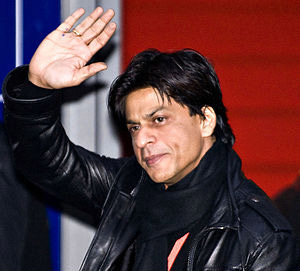 'I won't deny that I could have said something in a fit of anger, but I will not apologise,' said Shah Rukh Khan Thursday, adding that the security officials from the Mumbai Cricket Association (MCA) manhandled children and that they should say sorry for their rudeness.

'I don't think that my behaviour was incorrect or I did something illegal. I think what I did was correct. They are my kids and I have a responsibility towards them. I will not apologise. They (officials) should apologise to me,' Shah Rukh told reporters here.

Co-owner of Kolkata Knight Riders (KKR), the Bollywood superstar's statement came Thursday as he faced a lifetime ban on entering the Wankhede Stadium after he allegedly turned up drunk at the ground and misbehaved with security guards and cricket officials.

The incident took place Wednesday night after his Kolkata Knight Riders beat Mumbai Indians in the Indian Premier League match at the stadium.

The 46-year-old allegedly misbehaved and pushed the security guard at the stadium, following which he also abused officials from the MCA when they tried to intervene late Wednesday night.

'I had gone to pick up my children who were there to watch the match. I went there, congratulated my team and when I came back, I saw that there a gentleman was manhandling the children. They were pushing little girls. I just told him that this is not the way to behave,' said Shah Rukh.

'He (the official) spoke something in Marathi, something which I can't even repeat...I said he should not speak to me like this. It is extremely disturbing to see the way they manhandled children. Their behaviour is unpardonable. They were extremely highhanded. I won't deny that I could have said something in a fit of anger,' he added.

Shah Rukh said he possesses good sportsman's spirit and that he would never ever behave in a bad manner.

'We are public figures. We are actors and we will never ever behave rudely,' he insisted. 'There was no argument with the cops. They were just trying to control the fight. They said, 'Aap ghar jao hum dekh lenge'.'

A complaint has been registered in Mumbai's Marine Drive police station by the MCA officials. Assistant Commissioner of Police Iqbal Shaikh said the actor was 'smelling' of liquor.

Commenting upon that, SRK said: 'I was not drunk. I just drink socially. It is an easy way to pick on the celebrities and say things like that they were drunk or were angry.'