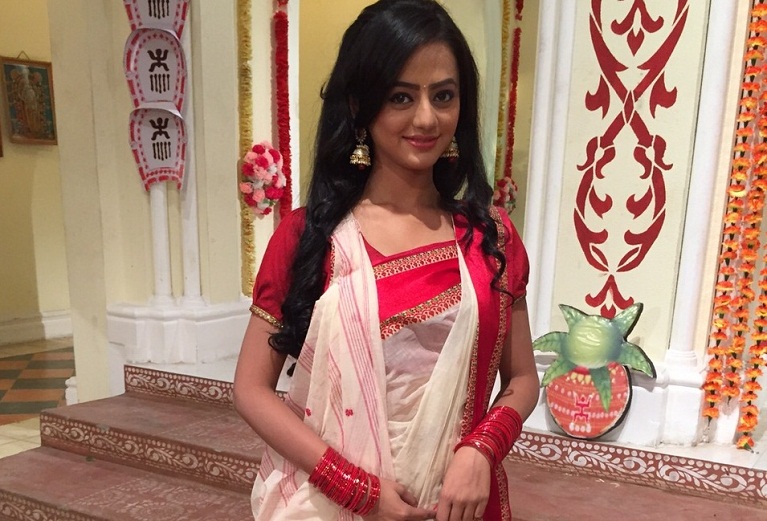 As the viewers are gearing up to watch new twists and turns in shows, Colors' popular show Swaragini is set to bring a new sequence, where a Bengali New Year will be celebrated on the show.

While the petite Helly Shah, has always won praises of the viewers for her looks and characters, this time too, the viewers would be amazed to see her new look on the show Swaragini.

Yes, the bubbly actress is all decked up and dressed in a Bengali attire which she has never donned on TV before.

When contacted Helly to know more about her Bengali attire, she said, "Yes, I will be seen in a different attire donning a Bengali look for the Bengali New Year celebrations that will be soon seen on the show. In fact for the first time, I will be seen in an Indian traditional dress on TV. Initially, I was quite uncomfortable but then after two days I am getting used to it. It is quite a big sequence so will be further continuing shooting for a week in the same attire."

We asked her about the excitement for wearing a different type of an attire she says, "I am very excited for this new look. As far as the look is concerned, I would say it is typical a Bengali saree laced with a red border on a cream base. I am wearing red bangles with big jhumkas and tries to keep the look sweet and simple."

Helly, is truly looking elegant in a Bengali traditional outfit!

waiting fr ur performance in Swaragini..

luv u Helly Shah and Namish Taneja...
u both rock as SwarYa...

6 years ago Hello Shah Is doing a perfect Job in Swaragini !!! SwarYa rocks

6 years ago Helly shah,you are looking soo gorgeous in saree too... SwarYa Rocks...

6 years ago Helly u look so pretty in saree... U doing rocking performance in swaragini...lovely
Keep it up

6 years ago Helly your doing amazing in SwaRagini !! Love You !!

6 years ago Helly is looking fab in the traditional costume! :D