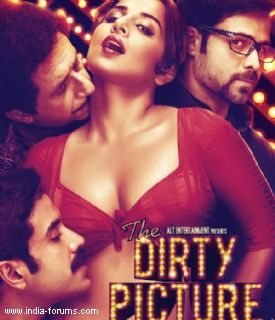 Mumbai, Aug 30 She is at her boldest ever in 'The Dirty Picture', but actress Vidya Balan says she never felt a sense of discomfort shooting for the movie as she was in the 'trusted hands' of director Milan Luthria.

'I have never enjoyed being a woman more than I did while shooting for 'The Dirty Picture'. I wasn't uncomfortable doing bold scenes because I knew I was in trusted hands,' Vidya told reporters here Tuesday.

The actress, who reprises late southern siren Silk Smitha's rise and fall as a glamourous star in the film, spoke at the theatrical launch of the film.

'I have worked with Naseer before but this time it was easier...I was less nervous this time,' said Vidya, who had teamed up with the veteran actor in 'Ishqiya'.

On working with Bollywood's serial kisser Emraan, with whom she has locked lips in the film, she said: 'I was wondering how it would be with Emraan, but it was fun.'

The trailer promises viewers that Vidya would indeed be seen in a never-seen-before avatar in the film, which is set for release Dec 2.