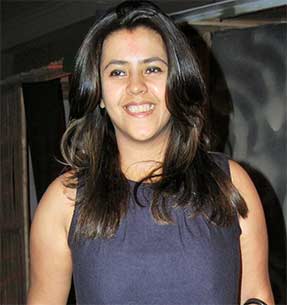 Discouragement and distrust are what producer Ekta Kapoor faced when she decided to make movies. But she took it with a pinch of salt and made a mark in filmdom by churning out hit movies on a wide range of topics - from underworld to supernatural thrillers - and proving naysayers wrong.

"When I did television, I was told that I cannot do movies and I won't be able to understand the medium. People thought my movies will be all about jewellery and 'saas-bahu'," Ekta told IANS in an interview.

In television world, she made an impressive beginning in 1995 with the comedy show "Hum Paanch" about a couple with five daughters. It turned out to be a huge success and changed the fortune of Ekta, then a plump 20-year-old who was carrying the legacy of being actor Jeetendra's daughter.

Thanks to her stupendous success, she was crowned the small screen's czarina.

She replicated the same success with aplomb on the big screen by making hit feature films - underworld thriller "Once Upon A Time In Mumbaai", "Ragini MMS" on a real life scandal and biopic "The Dirty Picture" - under her moviemaking banner Balaji Motion Pictures.

"Whenever you change your medium, you have to prove yourself again. One has to come out of the comfort zone again and again and again. My innings in films had a lot of struggle, but I enjoyed it," said the 37-year-old.

She collaborated with Sanjay Gupta to co-produce "Shootout At Lokhandwala" and now the two are coming out with its prequel "Shootout At Wadala".

There is no dearth of content in her films.

Asked from where she takes her inspiration for stories, Ekta said: "People inspire me the most. I love talking to people and I love knowing about their lives. I always believe that there has to be some inspiration in whatever you do, but it does not have to be from people you personally know."

Ekta had earned flak from critics for promoting regressive views through her saas-bahu TV sagas.

"I did so many TV shows and I never thought that it would be possible that people won't generalise the shows. In TV shows, you don't have time for effects; you just have time for content. Now everyone is doing what I did," she said proudly.

She has a very simple mantra when it comes to taking criticism.

Successful in both the mediums, Ekta feels fame should not stop one from pursuing passion and being creative.

"Success is the ability to do the work that you want to do. If you can do that, then you are bloody successful. You can make a lot of money, but if that money will tie you down to creating more money, then there is probably no fun in it. Success is when you make money but also when you use that money to do what you always wanted to do," she said.

She is currently looking forward to the release of the supernatural thriller "Ek Thi Daayan", which she has co-produced with Vishal Bharadwaj.

Her other projects include "Lootera", bing co-produced by Ekta and Anurag Kashyap, and "Shaadi Ke Side Effects", another co-production venture with Pritish Nandy.