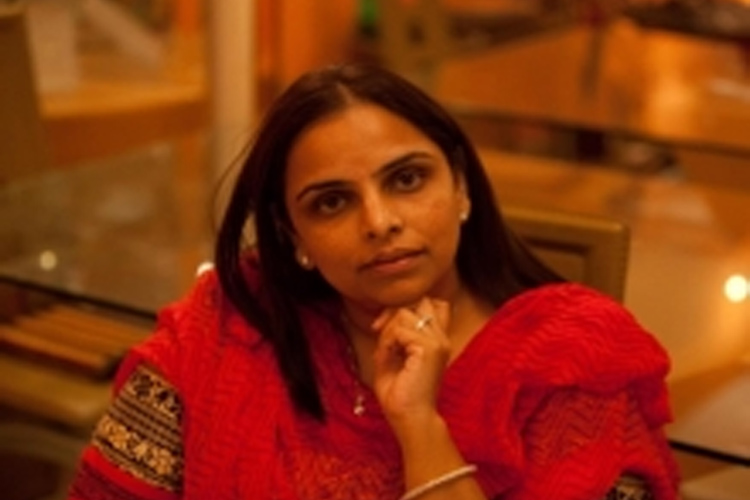 She currently belongs to the category of being one of the most successful producers on Indian television. We are talking about none other than writer and producer, Sonali Jaffar. She, along with her husband, Amir Jaffar have given us the hit robo-comedy show, 'Bahu Hamari Rajni_Kant' starring Karan V Grover and Ridhima Pandit in titular roles.
Now she is all set to give us another promising offering, 'Devanshi' which highlights a superstition and untouched societal issue. In a vis-a-chat with Sonali, the producer spills beans on 'Devanshi', 'Bahu Hamari Rajni_Kant' and even 'Yeh Hai Mohabbatein'.

Riding high on the success of 'Bahu Hamari Rajni_Kant', a comedy show, how do you feel about making a complete shift, to a serious issue like 'Devanshi'?

Yes, I understand people consider it to be a very serious and societal issue making it a hard-hitting concept to exploit. While it is fractionally, the whole presentation isn't 'serious' per se. The child Devanshi (Kashvi Kothari) is really cute and the scenes are also amazing. Watching the child's innocence will bring a smile to the face and a tear to your eye.

This is your second out-and-out show as a producer after 'Bahu Hamari Rajni_Kant', though you were actively involved in 'Yeh Hai Mohabbatein'.

That's true, but you know, maybe some other people and I were just so attached to 'Yeh Hai Mohabbatein (YHM)' that we don't feel we did not actually produce it. The show took a long time to flag off, a year almost. I actually started feeling like a proxy producer of the show (laughs). We wrote the show and were ready with it for one full year. There were a lot of problems we were facing and situations that we had to deal with. Even when Divyanka Tripathi was cast for the show, she used to ask us when will the show go on-air (laughs). So, yeah, I was more than involved with YHM, just as I am with Bahu Hamari Rajni_Kant' and now Devanshi'.

As mentioned 'Bahu Hamari Rajni_Kant' is doing great, but it is on a channel like Life Ok which is not quintessentially considered to be a big game player. While 'Devanshi' will be airing on Colors, the big canvas. Do you feel this difference?

I have actually done a lot of writing for Colors in the past so its not that I am working for the first time. But, having said that, Yes, I do understand this factor. However, it isn't that its Life OK and Colors being the difference. Its the concept of the respective shows. I can openly say that I am more confident about 'Devanshi' than I was about 'Bahu Hamari Rajni_Kant'.

What makes you say that?

I had this thought on my mind that, if people would not accept the Robot, they would reject the show. So my first Thursday was the deciding day. You may not believe and laugh at me, but I was actually stationed at Siddhivinayak Temple during 'Bahu Harami Rajni_Kant' (laughs). I literally thought that if this show doesn't work or doesn't move, I might as well go back to somewhere else. So, it is like when you load the chips against yourself, it has to perform. There was no option as either it works or it doesn't. We had put all our money into ..Rajni_Kant' and people actually considered us mad to be actually doing it. Fortunately, that isn't the case with 'Devanshi' where this concept will connect to the masses right away.

Some people have drawn the show's similarities with 'Udaan'. The concept may be different, but the factors like a child protagonist, revolting against the system and anarchy are the similar flavours in both shows. So, what do you feel about it?

I understand this similarity, but trust me, once you see the show, you will understand the difference. This one is a totally different concept and I am feeling people will be blown away by the concept. And I really feel that people will like it. There are so many instances where we see an under-aged kid working somewhere due to his/her circumstances, but we don't do anything about it. Hence, I liked that about 'Udaan' and Colors too, that they chose to highlight such an issue and question these things. But, 'Devanshi' is a completely different one.

Though 'Bahu Hamari Rajni_Kant' did not have star power but still had a face like Karan V Grover but 'Devanshi' has a relatively lesser known cast, unlike 'Yeh Hai Mohabbatein'.

You know actually, when Karan Patel came on board for 'YHM', he wasn't a known face. I was the writer of 'Kasturi' and we know how the show had to get shut. In fact; even he knows that, I was the most apprehensive when Karan was being cast as Raman for 'YHM'. Even Divyanka was a known face when she was cast for the show, but not the star that she is today. They became stars due to the show and the reason Karan and Divyanka became stars is because they were fresh. Hence, even with 'Devanshi', you have to give these people a chance. I have a feeling these people will be known as Kusum Sundari (Karuna Pandey) and Devanshi (Kashvi Kothari) and even Mohan (Aamir Dalvi). You will always notice that I look for faces and actors who are real performers and I have not cast anyone who is a bad actor. If he/she is doing a role, it is because he/she is a good actor and not only because of his/her charisma. I hope and feel the story and writing are enough to carry the show.

The show is set to be airing on the 7 pm slot which is not considered to be quintessentially a 'safe' one as it does not belong to the prime time slot. Do you feel fazed about it?

Not at all. 'Thapki...Pyaar Ki' did so well on that slot and several shows in recent memory have done brilliantly on this slot. Hence, I do not feel that is going to be challenge. And time slots are something that are decided by the Channel. I am sure, they as a channel wouldn't want any respective show to not do well. Hence, I am positive about the show and would remain the same.

Well, we hope this expose styled interview did inform the readers about a lot of unknown facts and know what to look forward to with 'Devanshi'. We wish Sonali Jaffar and the whole cast and crew all the best for the show.

Elizzy_Felix 4 years ago to be frank,if not for my mum that still watches the show and i can't change it, i have long back stopped watching yhm, it has become so crappy, i am not blaming the actors but the writers who because they want to still keep a particular character have turned this once upon a time beautiful show into a joke,turning KP a.k.a raman into a cry baby and making other characters look so dumb and sorry to say stupid, shagun as a character is becoming really very annoying and irritating, they should end this character already then find a way to revamp this show.

Az07 4 years ago Commenting for Ridhima Pandit! She is such a flawless actress & Bahu Hamari Rajni Kant rocks

kinny_ranvir 4 years ago No idea about Rajni kant show. But i knew Karan Patel since Kasturi days and i was his fan since. It was a good show. Why it went off air .No idea and i dont care. till last it was good show. And Karan was popular by then itself.

Toulup 4 years ago Thapki...Pyaar Ki has not been doing well lately and this show might have difficulties to get good trps at that time

Raina1234 4 years ago This lady has a history of killing stories.
Idk why she thinks that she's great.
Karan Patel
Divyanka Tripathi
Yeh Hai Mohabbatein

ajay227 4 years ago This woman destroyed d ever beautiful story of Krishnadasi with her continuous seperation of leads...and if at all she casted nd written Shravani character i hate this woman more!!