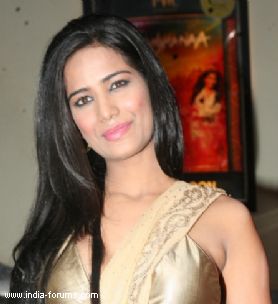 Controversy queen Poonam Pandey, who says she was rudely questioned by Mumbai cops for allegedly "misbehaving" with a man in her car here, insists her surname goes against her image.

The incident took place Saturday night quite close to her home on Mira Road and the man, as it turned out, was Poonam's brother.

"This is worse than the Taliban. It was 10:30 p.m. Not even late by metropolitan standards. I was with my brother, my own brother Aditya Pandey, and I wasn't drinking or misbehaving in the car at all when I was questioned by cops."

She alleges that the cops behaved normally until they heard her name.

"The minute I said I was Poonam Pandey their attitude changed. They began to get aggressive. They wanted to know what I was doing in the car with a man. Woh mera sagaa bhai hai. My blood brother."

Poonam feels she was hauled up only because of who she was.

"The cops felt since I was Poonam Pandey, they could create some excitement in their lives. And they got their eight minutes of fame. Suddenly it's all over on the TV channels. All kinds of strange insinuations are being made about my behaviour, my dress and the company I kept. If I can be pulled up for going on a drive with my brother, I shudder to think what would happen to any girl who goes out there with her boyfriend. I see the Talibanism of Mumbai in the hands of the local administration."

Her surname goes against her image, she says.

"Maybe the local law and order machinery feels I am from Uttar Pradesh because my name is Pandey, that I am an outsider. But let me inform them that I am a full blown Mumbai girl born and brought up in the city. And if I wasn't from Mumbai and even if I wasn't with my own brother in the car, and even if I was wearing a skimpy dress, what gives the cops the right to question me and challenge my behaviour? It wasn't as if I was drinking or making out in the car."

Defending her wardrobe, Poonam said the dress was certainly not skimpy.

"It was a normal full length dress. Even college girls wear shorts and tops to the campus which are more revealing. I guess my image has become an uncontrollable beast. Totally out of my control," she said.

Her family is in shock after Saturday night's incident.

"My brother has gone into shock. My parents are blaming me for putting him through this. But you tell me, is it my fault that I am who I am?"