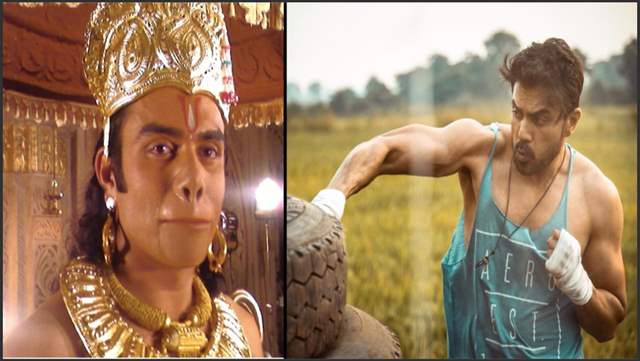 It is said that the struggles one faces today is helping them develop the strength they would need in the future! Vikram Mastal’s story who played Lord Hanuman in Anand Sagar’s Ramayan proves just that! He faced many hardships and struggled for one and half year before he finally bagged the role of Lord Hanuman.

While Hanuman and his stories of bulking up for the role have been the talk of telly town, here’s a little insider on what happened before he bagged the role. Talking about the journey before Ramayan, Vikram said that, “As an actor who had just entered the industry, I had no option. I was struggling to get good roles for one and half years before Ramayan. I did have financial issues, but bagging the role of Lord Hanuman solved them all. I received money which is important to survive in the industry. If you can survive in Mumbai for 2-3 years with the money you earned in one role, it definitely means that the role was good. I obviously worked hard to get the reward.”

Hanuman being a dynamic role in itself, has been a symbol of strength and devotion. On the same lines, Vikram talks about his devotion to the role and his journey, “I had thought of auditioning for the character of Meghnath. However, the casting director asked me to randomly pick up a script for the audition and I ended up delivering Hanuman’s dialogues.When they selected me for the role of Hanuman I felt blessed but had doubts about being able to portray the role due to my lean body structure. I was given six months to prepare for my role. Anand ji in his personal capacity financially supported me to build my body so as to look like Lord Hanuman.”

With such a superb cast put together, Ramayan is now reaching the peak of its story with the most awaited part being aired soon. Ramayan, the epic tale of promises and ideologies is aired every evening at 7.30pm and repeat telecast at 9.30am only on Dangal channel.

'Two And a Half Men' Star Conchata Ferrell Dies at 77