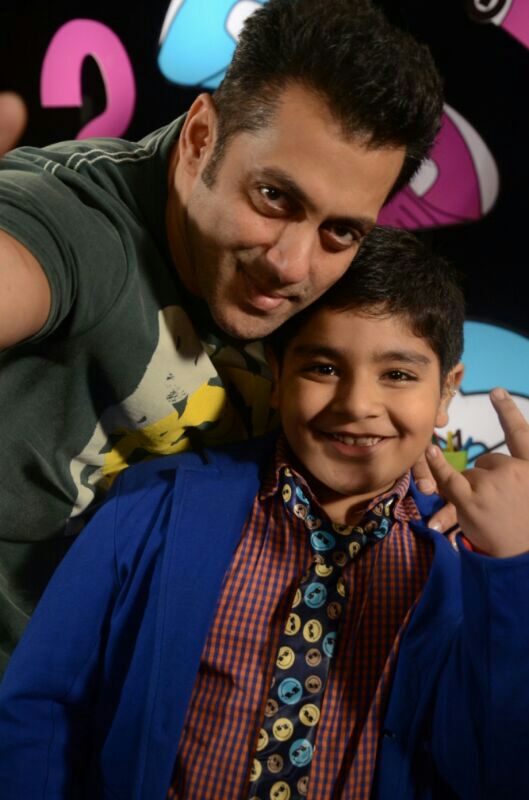 Popular child actor Sadhil Kapoor who is currently hosting the show Disney Channel's Captain Tiao, got his fame from Devon Ke Dev. Mahadev. Even though his stint in the show has ended but the little kid is still present in the hearts of his audience as Ganesha.

The cute kid Sadhil was overwhelmed when Salman Khan visited the sets of Captain Tiao to promote his film 'Kick'.

TellyBuzz spoke to Sadhil to know about his excitement and experience shooting with the superstar of Bollywood.

Amazed Sadhil on meeting Salman Khan says, "I literally started dancing when I came to know Salman Khan is going to come on my set. I was very happy after meeting him. We had lot of fun on the sets. Salman Khan gifted me a sketch and also a Skate Board. We played lot of games on the set and then we started dancing where I taught him my signature step and we were dancing on his movie song Jhumme Ki Raat."

Well, Sadhil truly is lucky to meet the Kick star and dance with him.

that is so cool!!

+ 4
9 years ago i remember dear prachi from Kasamh se days, our original Bani. that was one of the first serials I watched... congrats!!

9 years ago Ohwww Damn !!!
I wazz Really Lukngg frwrd for Genelia'z appearance :(
But nyway, Gen n Abhi wudn't luk gud together...
Prachi'z a Great actress too..Loved her in both d moviezz..Good Luck Prachi :D
Genelia- Waiting for u In to be in a Jhakkaaas movie ;D

9 years ago wowoow
wht is wrong with genelia
why why
but anyways parchi is a gud actress 2
:)
lol tht is so true tht nobody waits for anybody

9 years ago wow..i would love to see prachi back on silver screen. she is a great actress. but i think she will look good with ajay devgan rather then abhishek.

Amoli214 9 years ago Ohhh... hopefully she won't get paired with Abhishek... wouldn't be such a good pair. On the other hand Abhi and Asin would look gr8 together wat say?... ;)