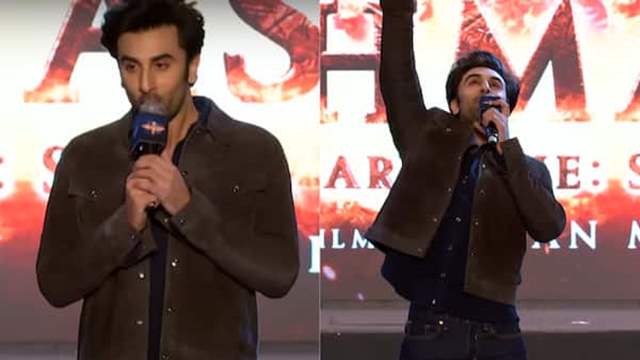 Bollywood actors Ranbir Kapoor, Alia Bhatt, and Ayan Mukerji yesterday were in Delhi for an event to launch the first motion poster of their film ‘Brahmastra’.

It was a happy fan event as the celebs were answering some questions asked by their fans.

During the event, the Sanju actor was seen getting emotional as he recollected his fond memories with Bollywood veteran actor his father Rishi Kapoor who had passed away last year.

Speaking of the same, Ranbir shared how his dad was looking out for him when he first signed the film.

“I miss my father terribly today. I remember during the making of this film, during these last how many ever years, he kept fighting with Ayan and me, and kept, questioning us ki ‘what you doing, who takes so long to make a film, who spends so much of money? Ranbir you’re not making one penny on this film, VFX film kaun dekhega India mein? India mein koi VFX film nahi dekhta."

“But I believe he’s here somewhere. I hope he’s proud, I hope he’s smiling. And just to pay a small tribute to him, if you guys know it, please join me.”

Ranbir then goes on top of his voice and says Rishi Kapoor’s iconic dialogue,

‘Kya tumne kabhi kisise pyaar kiya?” as the crowd responds to him with a loud ‘Kiya’! As he concludes the line, he looks up and sends a kiss.

While in the most anticipated film ‘Brahmastra’, Ranbir Kapoor will be essaying the role of Shiva and is said to be a man with supernatural powers.

“I know the term superhero gets used with the film a lot because it is sort of in that genre. But in my mind, it is not a superhero film. It is a fantasy adventure epic. It is a modern mythology piece. Shiva is closer to a modern representation of a deva than a western superhero. He is a normal guy who is born with certain energy within him.”

Apart from Ranbir and Alia, the film also stars Amitabh Bachchan, Dimple Kapadia, and Akkineni Nagarjuna in pivotal roles. Mouni Roy will be reportedly be seen essaying a negative lead in this three-part franchise film.

+ 8
11 months ago I am sure he would be giving his blessings.