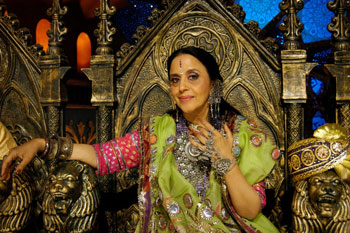 Ila Arun, the towering personality in the genre of Folk Music will head the team Maati ke Lal in NDTV Imagine’s biggest battle of Musical Genres, Junoon..Kuchh Kar Dikhaane Ka. The singer with a very unique husky voice ascertains that folk music is very close to her heart, and she loves and lives folk. “I don’t claim any kind of authority of folk, but every song I sing has folk in it”, says Ila. The show will have three genres of music competing with each other, Folk, Sufi and Filmy Music. Each team will have 6 contestants and will be mentored by eminent personalities from the music industry, namely, Ustad Rahat Fateh Ali Khan for the Sufi Ke Sultan, Ila Arun for Maati ke Lal and Anand Raj Anand for Bollywood Ke Baadshah.

Talking about the show Junoon, Ila Arun says, “Junoon has a nice concept wherein three different genres of music will be put to test. I am glad that the channel has included folk in its concept, as every other music has had its origin from folk. So this will be a good learning curve for the viewers also”. When asked whether she will be part of the usual drama that is kindled in every other reality show, the singer is quick to comment, “I do not believe in creating unnecessary drama. I think we don’t have to do that as the quality of singers and the concept of the show will speak for itself”.

With Junoon, Hrithik Roshan will mark his entry into television as the Goodwill Ambassador and will lend his support to the participants. When asked whether Hrithik’s presence will get the show big TRP’s, Ila Arun quotes, “If you feel the channel has roped in Hrithik Roshan into this reality show just because stalwarts like Salman Khan, Shahrukh Khan and Shatrughan Sinha are seen in other reality shows, then you are wrong. Hrithik has a very good knowledge of music and comes from a musical family”.

Ila who will be grooming her six talented participants believes that it will be the judges who should be given the responsibility to select the best talent. However, she feels bad that the contestants they have chosen for the competition will now be put thro’ the elimination format. “But all said and done, this is a show in which only one will win” says Ila as she comforts herself.

14 years ago This lady is very funny...and laughs a lot sometimes for no reason..

+ 2
14 years ago Thanks! OMFG this woman went crazy during IPL! haha