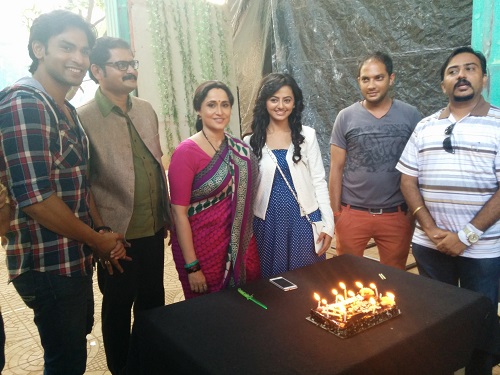 She is pretty. She is beautiful. She is a seasoned actress. She is Nishigandha Wad who is currently been seen in Colors' Sasural Simar Ka as Sujata Bharadwaj and Sony Pal's Khushiyon Ki Guallak Aashi as Prabha. She celebrated her 42nd birthday on the sets of her new venture Khushiyon Ki Gullakh Aashi. In this candid chat on her birthday plans and more, Nishigandha avers -
"I always like spending time with my daughter, my husband and my parents on my birthday. But at the same time, I also spend my birthday with the children of lesser God (Underprivileged, disabled) that has been a practice since childhood which my daughter too follows. In my own humble right, I try giving out and doing the best for the less privileged people. This is one such tradition that my sister and I follow and share since childhood. This is something that has been taught to us by our parents. I feel, despite being in any corner of the world, you carry your roots wherever you go and that keeps you grounded to your values too."
Go on...
"I have been invariably working on my most of the birthdays because since we are doing television, we are working for 25 days out of 30 days a month for a submission of six episodes a week. Planned or unplanned, it has been a practice. On this birthday of mine, I would like to give out a very special message - pursue your dreams and give your fullest efforts. As you say, the greatest and the longest journey begins with the first step so take that step in the direction you want to live in," she concludes.
Well said Nishigandha!
TellyBuzz wishes you all the good luck and success n all your future endeavors.
Upasana Patel
1 Likes