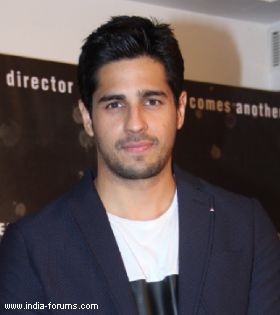 Actor Sidharth Malhotra, who made his acting debut in 2012 with Alia Bhatt and Varun Dhawan in "Student of the Year", doesn't see them as competitors and wishes them luck for their forthcoming film "Humpty Sharma Ki Dulhania".

The 29-year-old along with Alia and Varun was mentored by filmmaker Karan Johar and all three have tasted success since their debut film.

When asked about competing with each other, the "Ek Villain" hero told IANS in a telephonic interview from Mumbai: "Me, Alia and Varun feel like we've gone to school together. Why would we compete among ourselves when there's so much...

"We have different and unique styles and films. It's tough to make friends in the industry. We all have... I want to see 'Humpty...'. I've heard Alia's song recently and she has sung really well. She has a great voice. I hope it's a big success," he added.

Produced by Karan and directed by Shashank Khaitan, "Humpty..." will release July 11. It showcases contemporary Indian family and is devoid of melodrama that used to dominate the screen earlier.