Taare Zameen Par, the latest Hit given by Aamir Khan, the Director gives viewers a strong message wherein 'Every Child is Special, come what may!!'. But it does look like some kids are born unlucky and they are deprived of parents' love and care in all walks of life..

Bobby Bhonsle, the writer of several Balaji soaps like Kahiin Toh Hoga, Kasam Se, Kahaani Ghar Ghar Ki, Kutumb, Kaavyanjali, Kaisa Yeah Pyar Hai had a fall out with his parents and feels his life story is similar to the story of Taare Zameen Par. 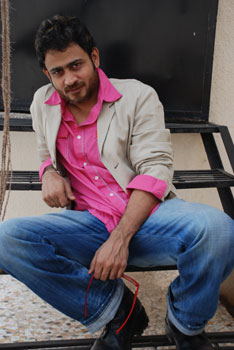 Featured Video
Bobby is accusing his parents especially his father of misappropriating his money. “I have nothing against them as such. I came to Mumbai with my own borrowed money. My parents gave me no support and the last thing that now my father could do, was not giving back my money. Not only that, the house where they are living now is leased in my name and even though I am out of it, my father is not paying rent. I am forced to pay rent for two houses now,” says Bobby and adds further "Paying that is okay. I am their son, so its my duty to take care of them. But atleast, they can see my side too."

Bobby is now living alone in a separate apartment at Yari Road. Two of his long time friends Yash Tonk and Gauri Tonk helped him shift to the new apartment and still stand by him during his crisis. Bobby now after watching Taare Zameen Par feels it is his story as from childhood, his parents never understood him. An emotional Bobby says, “I have seen so much of pain from my childhood, I don’t even remember being given a chocolate ever when I asked for it, instead was physically abused so many times. That film is like my own life story.” His father Captain Ajay Bhosle is a famous astrologer and Bobby just wants them to give him back his ancestral money on which he feels he too has full right.

While going through this mental trauma, Bobby was unable to write for few months. But now he is taking a grip on his life and has also started few social services. “I have associated myself with a NGO who help out kids. I am doing whatever I can for those kids. I am also launching a charity organisation where 25% of my earnings would go. This money will be used for these kids,” explained Bobby. Talking of writers, he feels that they are never paid the dues for their creativity. “How many people remember who wrote a story? A writer gives life to a character, runs the serial on his creativity, but never will you see them even getting thanked in any award function.”

Bobby is trying his best to put the bitter facts of his life behind and move ahead, but the 'son' in him craves to get noticed by his parents..

+ 2
14 years ago hahaha ya she is Mona Singh unless she has gotten married to some Kapoor without anyone's knowledge...hahaha

+ 3
14 years ago haha yea it's Mona Singh...unless she got married...but even then It would be Mona Oberoi or something like that cuz of Karan's last name lol

14 years ago Aww..I feel bad for him, no one deserves to be physically abused as a child. It's nice of him to give 25% to charity even though he has two houses to pay for!!
His parents should be proud

14 years ago I don't know, there's something odd about him coming out of the dark all of a sudden, especially after the movie Taare Zameen Par was such a hit. I feel like he's using that popularity to generate sympathy votes. And if someone loves their parents that much you wouldn't say those things above in public. That control would make the better son of you.

And I really don't understand how he relates his story with that of Taare Zameen Par. They are very different, he's claiming an abusive childhood and then the fact that his parents didn't want to see him going in to the tele industry. Umm...zero connection to TZP where the child was misunderstood because of his learning ability. TZP helped us see inside the mind of a child who was going thru a very deep yet unnoticed troubled experience. It attempted to remove the stigma associated with learning disorders (as seen thru the reactions of the father), it showed what happens to children in a certain family dynamic...I can go on and on.

But really, I feel that if his intentions were to do good, he could have done so without the publicity he's stirring and bad rep he's giving to his family. Does he expect for them to beg for forgiveness now? I don't see them doing that anytime soon.

14 years ago I feel sorry for the pain he has went through. I do belive that writers should get their due. Ekta should start appreciating her writers more.

14 years ago haila !!! he wrote kaisa ye pyar hai..... the most hutt k serial,balaji has ever prodeuced