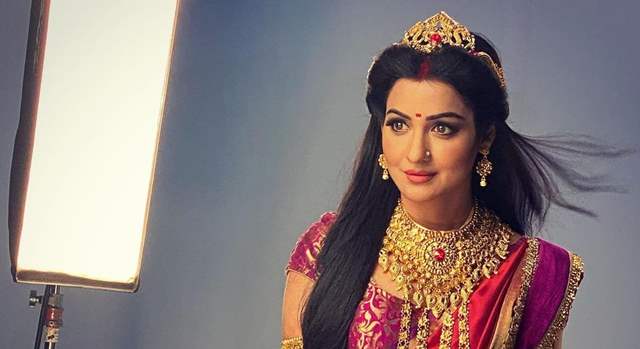 Sony SAB is set to roll out an interesting show titled Shubh Laabh- Aapkey Ghar Mein. The show is produced by Jay Mehta Productions and is slated to soon go on-air. With an exceptional, thought-provoking storyline and a super talented line up of cast, the show will draw attention to the true meaning of devotion and how you can be your own miracle.

The story revolves around Savita played by Geetanjali Tikekar and her family based in Ratlam with Nasir Khan as her husband. Donning the divine impersonation of Goddess Laxmi is Chhavi Pandey.  The show also features Tanisha Mehta as Shreya,  Mitil Jain as Rohit - Savita’s eldest son, Manan Joshi as Vaibhav – Savita’s youngest son and Mahi Sharma as Roohi – Savita’s daughter.

India Forums got an opportunity to interview versatile actress Chhavi Pandey. The actress opened up on her thoughts on costume drama, experimenting with characters, preparations to play Goddess Laxmi and much more. Read the excerpts of the interview below.

1. What prompted you to take up the show?

The show Shubh Laabh- Aapkey Ghar Mein has a very different concept and I have got an opportunity to portray a very different character in it. In my career, I have never done any monotonous character but have always experimented with the shades I have played on screen. So, this is one of the major reasons I took up this show. Also, the concept of the show has never been explored on Indian television screens, so I knew I want to be a part of this show.

2. After Prem Bandhan, this show has a different genre. What preparations did you do for the same?

This is definitely a very different genre, and a different character comes with lots of challenges and responsibilities. It is difficult to essay the role of a Goddess and channel that energy. It is furthermore challenging to portray it on-screen and convince people of the character you are playing. As an actor, I prepare even the slightest nuances of my character every day, and I keep rehearsing a lot and try to keep my personality and body language correct so that the audience can connect with me and accept me playing the role of Maa Laxmi.

When we were shooting in Ratlam, people used to come to us and instantly feel connected to the concept of the show. One family came to visit me and Geetanjali Ji on sets and brought a bouquet and famous Ratlami sev for us. The woman who had come along with the family told us that she has also experienced the dilemma that we are showing in Shubh Laabh in her life. I was really intrigued by her. I feel this is the incident that I shall always remember.

4. You’ve done a costume drama earlier. How difficult do you find them?

I have done one costume drama till date, which was a mythology show and I essayed the role of Maa Parvati. But this show has a whole different concept, and I am not playing a stereotypical Maa Laxmi which people have previously watched on television. It will be a different experience for the audience with Shubh Laabh.

My character in the show has a divine presence and it requires special preparations that ensures we capture the tiniest nuances. Since, one can naturally play or improvise with a regular life character, but while portraying a Goddess, we need to think and act accordingly.

5. Reaction of your friends and family?

My family has been very supportive throughout and now they are very happy watching me grow as an actor. My father, mother and uncle have played an important role in making me whoever I am today. They are as excited as I am and are waiting to watch the show.

Keep reading this space for more such interviews and news.

6 days ago Best wishes for your new show Chhavi Pandey. You are looking so gorgeous in the promos.