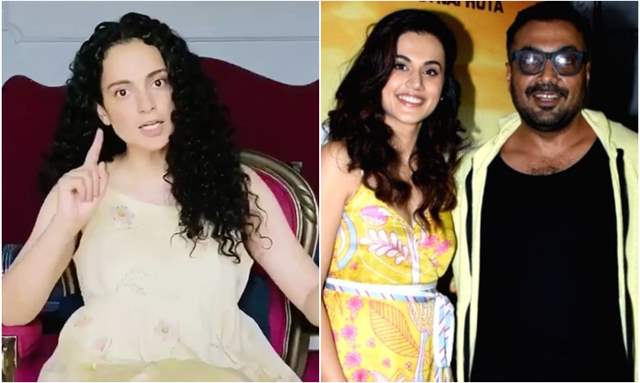 Anurag Kashyap and Taapsee Pannu landed in a tough spot after the Income Tax department raided their Mumbai residence. The IT department disclosed that some discrepancies and manipulations were found during their raids on properties of the filmmaker, the actress and others linked with now-dissolved Phantom Films respectively.

Now, Kangana Ranaut has pointed out that many of these names were linked with 'Me Too' movement earlier.

The Tejas actress took to her Twitter handle on Friday and tweeted, "Is it a coincidence that each and every stakeholder of Phantom n Kwan has been accused by multiple women of rape, molestation n harassment."

The actress quoted the Tax official’s statement in Taapsee-Anurag’s IT case and asserted that she had her suspicions when she saw them provoke migrant labourers with some high budget anti-India animation advertisements.

“IT department claims data from their phones has been wiped off, money laundering numbers and involvement of stakeholders can be shocking,I had my suspicions when I saw them provoke migrant labourers with some high budget anti India animation advertisements,” wrote Kangana.

In another Tweet, Kangana pointed out that data can be retrieved and how terrorism has been deep-rooted in film industry.

"But these are small players. One can only imagine how deep-rooted is terrorism in the film industry," the actor said adding that the government should set a good example for everyone.

The IT department conducted searches at various properties linked with The Phantom films in Mumbai and Pune, and the IT department on Thursday said it detected financial irregularities of over ?650 crore. In its findings, however, the names of the Bollywood personalities were not mentioned.