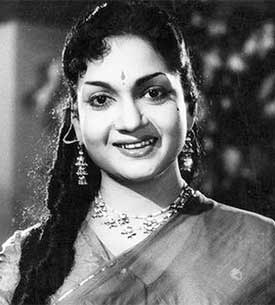 Telugu actor Chandramohan remembers late actress Anjali Devi and says that ever since he played her son in his debut movie - 1966 Telugu drama "Rangula Ratnam" - he treated her as his mother.

"I will always remain her son. I started off my career by playing her son in 'Rangula Ratnam', and since then we have shared a mother-son relationship. I still can't digest the news that she is no more. I feel like I have lost my mother," Chandramohan told IANS.

Anjali Devi died Monday due to heart-related problems. She was 86. She is survived by two sons.

He said that Anjali treated him as her own son.

"Sometimes roles in films are only limited to the screen, but my relationship with her (Anjali) continued off the sets too. She always treated me like her own son and would make it a point to attend all my felicitation ceremonies," he added.

Chandramohan feels she is irreplaceable.

Born in 1928 as Anjani Kumar, she made her cinematic debut as a child artist in a 1936 film. It was director C. Pullaiah who rechristened Anjani as Anjali Devi.

Before entering films, Anjali was a popular theatre artist.

Mostly known for starring in mythological and family dramas, Anjali became a household name with memorable performances in films such as "Lava Kusha", "Bhakta Prahlada", "Bhakta Tukaram" and "Badi Pantulu".