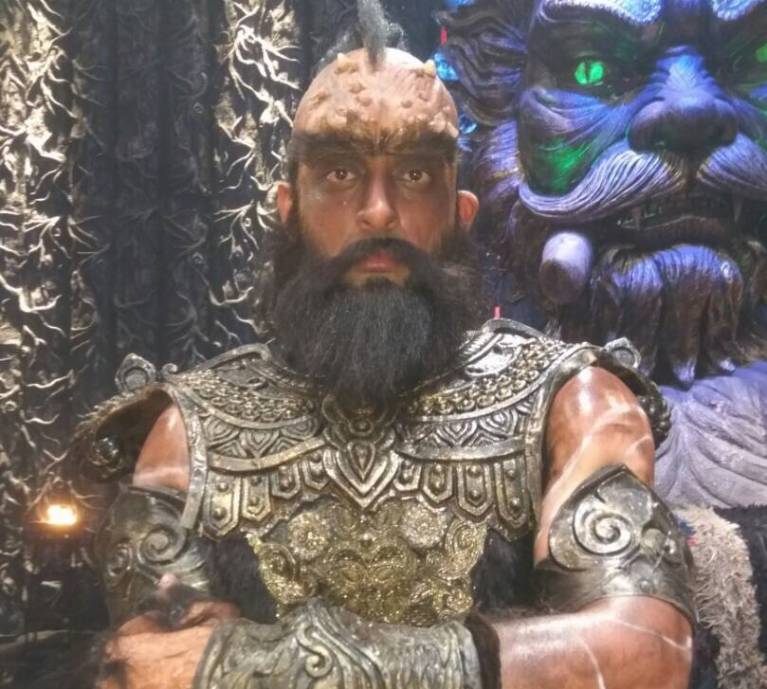 Actor Abhaas Mehta, who has been seen in shows such as Badalte Rishton Ki Dastaan and Iss Pyaar Ko Kya Naam Do, will now be part of Siddharth Kumar Tewary's Mahakali. The actor will be playing the role of Shumbh and talking about his role, he says, "My character is called Shumbh. He is the king of demons and along with his brother Nishumbh, he has the blessing that no one, whether human or God, can kill him. The plot revolves around his love for Parvati and how she transforms into Kaali to fight her demons."

Being a part of costume drama is always fun, says Abhaas, however, the actors adds that he keeps his suggestions limited to how he should act and not how he looks. "The look is unique, something that has never been seen in an Indian show. There is a lot of detailing in the costume and the makeup. Of course, all actors should have their inputs on how they perceive the character they are intending to portray. I don't interfere with the look and all of that. My inputs are only performance based which I discuss with my director and then we go ahead after he gives his opinion." he says.

Being on the set is fun for Abhaas and he has made a lot of friends too. "Danish (Akhtar Saifi) and I are perpetually shooting together so we get along quite well. I happen to know Saurabh (Raaj Jain) a lot as he has been my girlfriend Zeenia's (Wadia) friend for some years and now I'm fortunate enough to be a part of the same show as him. I admire Pooja's work quite a lot. I think she's apt for this role. Haven't shot much with her but whatever little I did, it was fabulous and I think we got along fine. I have had only a few conversations with Nikita (Sharma) and Falaq (Naaz), again due to shooting at different locations, but they are so sweet," he says.

However, the best part of the show is to get an opportunity to work with Siddharth and Rahul Kumar Tewary, says Abhaas. "I have waited to work with Swastik (Siddharth and Rahul) for quite some time. I'm finally proud that I have fulfilled that desire. Siddharth is a creative genius. Working under his guidance will teach me so much and hopefully, it takes my performance to new heights. I am extremely thrilled to be working with them," he adds.

Talking about future plans, Abhaas says that he has never really been specific of the kind of projects he wants to take up in the future and likes to concentrate in the present. "I have never been specific the kind of work I want to do. I want to do what I like and at this moment I love Shumbh and Mahakali," he says.

He might be at ease in front of the camera now, but Abhaas says that he still remembers his first shot and how nervous he was.

RoseWine 6 years ago who cares! Celebrities will do what they want at the end of the day!

Tiashah 6 years ago What the hell was she thinking! she looks terrible(not that she was wow anyway) but really :S
why do these celeb do that to themselves lol

PiaT 6 years ago Some people are saying it is none of our business, please She is a public figure so it is definitely our business. As fans we have a right to comment on what we like or don't. Taking the fans to be stupid to believe a blatant lie like that is not going to fly. What lip tool can cause the nose to become angular..

fm05 6 years ago Unfortunately the competition amongst the Bollywood actresses has caused what was a natural beauty to tamper with her God-given features and the results are not pretty. For some actresses, cosmetic surgery worked I.e. PC but sadly hers is a cautionary tale. Don't get why these people can't have confidence in their acting ability rather than being vein about their looks. Vidya Balan is the exception to the rule.

prinks75 6 years ago I think if u are in the acting business then yes u r trying to please your viewers. Dont really like her mush so dont really care how she looks now but ya she looks crap and that is the fact.

Aya. 6 years ago You people really need to mind your own business ! Damn ! So many noisy people ! Whether she had gotten plastic surgery or not, isn't any of your guys' business ! Damn ! I'm not a fan of her, but leave her the heck alone for God's sake !

silvermoonlight 6 years ago She looked strange in JTHJ

Dunno what she has done or not done but she has not changed to look better.

Her best look was in her first movie

After that..something has changed in her facial features

Hope she gets all that sorted out. Maybe she needs some advice from Madhuri and Juhi..who age very gracefully

.BumbleBee. 6 years ago If its temporary..Thank God

Carabelli5 6 years ago Oh and that reminds me I am Santa Claus.

aarrsshhii 6 years ago u might or might not have gone under the knife...but ur face really looks ruined now...!! sigh...!

exclusive
Exclusive "In terms of hard work and perseverance, I don't think ...
11 hours ago

Sanjay Dutt Admitted In Hospital Due To Breathing Problems; ...
13 hours ago

'The camera should never go off', Nawazuddin Siddiqui on ...
17 hours ago