Ajay denies that his film is a tak 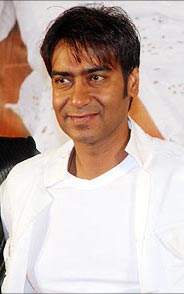 Featured Video
e off from Notebook. "My film is completely different.
Every script is different from one another. Every one tries to make some thing different. My film has its own standing in its own genre", he quips and insists that he did not zero in on his wife Kajol for his film just because she happens to be his wife. "I thought that Kajol was the best actress suited for the role. She fitted the bill perfectly to the T", he states.

Ajay insists that it was a conscious decision on his part to go in for talented actors instead of stars for his film. "I was clear of what I wanted, the day my script was ready. I wanted to cast Kajol, Karan, Sumeet Raghavan etc in my film. Isn't every director supposed to take a conscious decision to cast good actors so that he can mould them according to the way the script demands", exclaims Ajay.

Ajay confesses that he did experience a high as a director. "As a director, I find very hard pressed for time. Lot of work still needs to be done and the post production work is draining me off. All said and done, I do not think my life or for that matter my life style has changed in any way ever since I turned a director. I am the same family man even now, and long to spend more time with my daughter Nysa and wife Kajol", chirps Ajay.

The major lesson that he says he had learnt after producing Raju Chacha was not to go mad and overspend. "The film did wel,l but it did not enable me to recover my cost of production. As far as U, Me & Hum is concerned, I saw to it that I did not go over board as a producer. Yet, at the same time I did not cut down on the costs either. I managed to strike a neat balance as a producer as far as U, Me & Hum is concerned".

Ajay does not want to divulge details about his role in Shree Asthtavinayak's film Golmaal Returns; because he thinks it is too early now. "All that I would say is that I play Kareena Kapoor's husband in the film. The film has a lot of situational humor embedded to it. Rohit Shetty who had directed Golmaal is directing this one too, though it is not a sequel. Golmaal Returns is part of the Golmaal series and does not necessarily have the same characters of Golmaal, except for one or two".

Ajay has no regrets that Sunday with Rohit Shetty as the director had flopped, though he had put in his best foot forward as an actor, because according to him there is no way you can guarantee success or failure of a film before it is released. "We never frankly thought that his Golmaal would turn out to be so funny and be a big hit at the box office. While Sunday had a restrained comedy, Golmaal Returns is an out and out over the top comedy. We had a ball working on the sets".

Ajay admits that he is very choosy as far as his films are concerned. "As an actor, I go by the script first and the director and the producer afterwards. Besides a good script and a good director, you need a sound producer to see through the completion of your film. I like good work because I enjoy doing good work. Though it may sound very clichéd, I feel that as an actor, it is good to do different roles because it keeps you going as an actor instead of letting you stagnate in your path".

Ajay says that he is quite amused by the rumors that Rajji and he have fallen out after the dismal fate of Halla Bol at the box office. "I do not judge a filmmaker by the performance of his last film at the box office. I am committed to Rajji for his Ashoka as well as Ramayan"

Besides Golmaal Returns, Ajay has a couple of releases like One Two Three, U, Me & Hum and Kirit Khurana's Toonpur Ka Super Hero with him and Kajol as live characters along with animated cartoon characters.