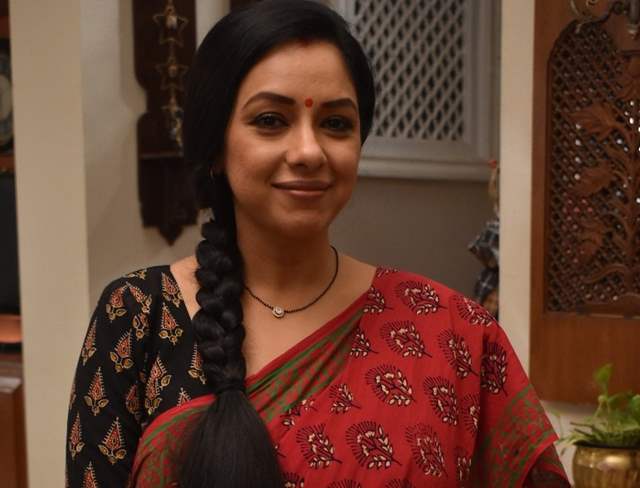 Rajan Shahi’s “Anupamaa” is taking the audience on an emotional roller-coaster ride. The show is about a homemaker, who undermines herself while taking care of her family and their needs. It features Rupali Ganguly in the titular role and the actress says the story is so well-written that she cries every time she reads the script.  She shared because of the current pandemic situation, she doesn’t even kiss or hug her son once she reaches home but is hopeful that he will be proud of her once he sees the show.

“I cry every time I read the script. ‘Anupamaa’ was a once in a lifetime opportunity, which I couldn’t let go. After the shoot, I can’t even go and hug my child, it’s so upsetting. I have not hugged him and kissed him or sat closer to him, and yesterday he came and asked me ‘Mumma, when will I kiss you again, after six months?’ I cried, my heart broke. But then when I see ‘Anupamaa’, I feel somewhere it is getting compensated. Maybe now he feels that my mother is not there with me, but once he grows up and he will watch the show, he will be so proud of me,” she said.

The “Sarabhai vs. Sarabhai” actress, who took a seven-year sabbatical from acting, says she had mixed feelings about facing the camera after such a long time. “Sometimes I feel I never went away, and sometimes I feel ‘Oh damn! I don’t know anything anymore.’ So, it feels familiar but at the same time, it feels intimidating. Because when you come back in a fantabulous role and a phenomenal show like this, only very blessed and special people get a comeback like this. It makes you nervous, it makes you feel that you have a huge responsibility on you, yet sometimes out of respect you feel do I know anymore and what am I doing," she said.

"I mean I know my craft, but now, after seven years, the television scenario has changed, and taste has changed. So you never know what’s going to be accepted and what’s not. But, the response that has come in for the first three episodes, I think I am doing OK,” she added. Rupali revealed that it was her husband who pushed her to accept the role and that’s why she dared to say ‘yes’ to producer Rajan Shahi.

“When I got to know about ‘Anupamaa’, I so badly wanted to be her. But then, I was like does Rajan have me in mind, will I be able to do justice to Rajan’s vision, and how will I get outside of the house. In the past seven years, from buying groceries and vegetables to dropping your child to school and picking him up again, I have been doing everything, so you think you are indispensable, but you are not. Till my husband told me that you can’t let go of this role and it’s high time you received your due as an actor. And then I had the guts to say yes to Rajan, and gave him my full commitment,” she said.

Asked if she relates to her on-screen character? “I totally relate to this character, because for me my family comes first. My family is of the utmost importance to me. So, because they gave me a go-ahead, I had the guts to pick up the show. I totally relate to the character’s love for her family,” Rupali signed off.  “Anupamaa” airs Monday to Saturday on Star Plus at 10 p.m. The show also features Sudhanshu Pandey, Paras Kalnawat, and Aashish Mehrotra.