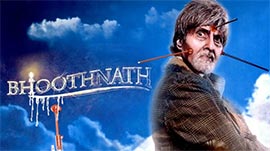 After co-directing National Award-winning film "Chillar Party", Nitesh Tiwari will direct "Bhoothnath" sequel and says he cannot think about the project without Amitabh Bachchan and is waiting for the megastar's dates to start the film.

The original, directed by Vivek Sharma, starred Amitabh in the title role of a ghost who befriends a child called Banku (Aman Siddiqui). Shah Rukh Khan and Juhi Chawla were also in the cast as naughty Banku's parents.

It was released in 2008 and four years later Tiwari is set to direct the sequel to the movie.

"If things fall in place then I will be directing 'Bhoothnath' sequel. I am done with the scripting of the film and we have approached Mr. Bachchan to be part of it. He loved the script. Now we are waiting for his nod so that we can go ahead," Tiwari, who co-directed 2011 release "Chillar Party" with Vikas Bahl, told IANS.

Asked if Shah Rukh and Juhi will be part of the sequel, he said: "Nothing has been finalised so far apart from Big B in the sequel. I can't see 'Bhoothnath' sequel without Big B. So you will have to wait and watch."

"The film will go on the floors once Big B gives us his dates. So right now we are not in a position to say anything," he added