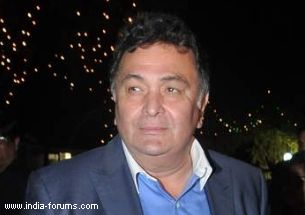 Veteran actor Rishi Kapoor, who plays Sonam Kapoor's father in debutant director Nupur Asthana's "Bewakoofiyaan" says he isn't likely to be seen in any "stereotypical" fatherly roles as he finds them "too unexciting".

"If you notice, I didn't play my own son's (Ranbir) father in 'Besharam'. It is not vanity, just sanity. I can't do the stereotypical father's role. They don't challenge me as an actor at all. So I avoid doing father's roles. It's just too unexciting," said the 61-year-old.

"To my good fortune I am getting roles that do not require me to be the so-called father," he added.

"Bewakoofiyaan", he says, offered him a rare chance to further a father's role.

"In 'Bewakoofiyaan', there are only three main characters - Sonam's, Ayushmann's (Ayushmann Khurrana" and mine. The film gave me a chance to do something more than what we generally see fathers do in our films. Not that there is anything revolutionary or path-breaking about a father frowning over a daughter getting married," he said.

However, the versatile actor sees "Bewakoofiyaan" as a sign of the changing times.

"When I did the roles of the loverboy, parental approval for my choice of soul-mate was very important. And if the loverboy of yesteryears didn't get the father's blessings, he had to elope with the girl.

"If you remember, in 'Bobby' (1973) I had to flee on the mobike with Dimple Kapadia. Now in 'Bewakoofiyaan', my daughter says, 'This is the guy for me. You better accept it.'"

Rishi finds his transition from the rebellious lover-on-the-run in "Bobby" to the disapproving father in "Bewakoofiyaan" interesting.

"Today in 'Bewakoofiyaan', I am in the position that Pran-ji as my father occupied in 'Bobby'. I've been working for the last 42 years. And look at how much has changed. In 'Bobby', the parents tried to bully the lovers. One can't do that anymore.

"In 'Bewakoofiyaan', the father has to accept the fact that his daughter is an adult and can take her own decisions on her own life, however concerned the father may be about his daughter's lifestyle.

"Couples today work together towards achieving a common goal, whether it's a house, or holidays abroad or whatever. The parents have little say in their children's life," he said.

Rishi doesn't interfere in his own children's life in his real life. He has two children - daughter Riddhima and son Ranbir.

"They are independent individuals with minds of their own. If today I was to behave like Pran saab in 'Bobby', my kids would laugh in my face. Today parental intervention is permissible only to the point where the kids respect your opinion," he said.