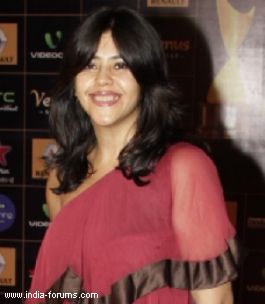 Reacting to allegations that "Ek Thi Daayan" portrays women regressively and promotes witchcraft, Ekta Kapoor says she cannot justify everything in a film.

Releasing April 19, the Kannan Iyer directed film is a supernatural thriller that revolves around a 'daayan' (witch).

The National Commission for Women (NCW) summoned both the producers - Ekta and Vishal Bhardwaj - last week after a complaint was filed by Ipsita Roy Chakraverti, a Wiccan priestess, alleging that the film shows women in regressive roles.

Chakraverti has also filed a petition to President Pranab Mukherjee, requesting him to ban the film as it promotes witchcraft.

"I am beyond this. I cannot justify everything that happens in a movie or supernaturally because there will always be questions raised on various issues," Ekta said in an interview.

"But I would like to say that the movie was being made for two years and I don't know why people got up 10 days before its release (realising) that its content could be problematic. I just don't get it," she added.

Meanwhile, "Ek Thi Daayan" promotions are in full swing with all the leading actors - Huma Qureshi, Konkona Sen Sharma and Emraan Hashmi except Kalki Koechlin - participating in it.

When asked, Ekta said: "Kalki is busy shooting for a film abroad. She and Emraan will join the promotions on April 9 and 10."