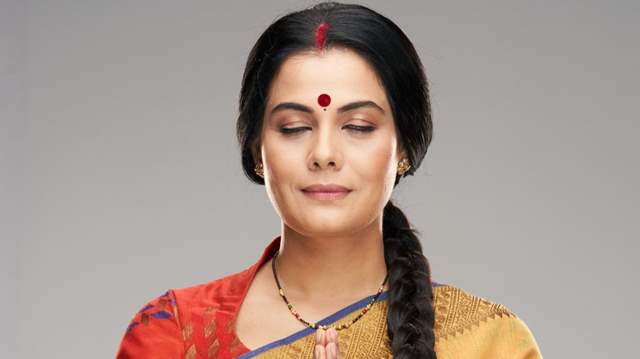 Sony SAB is set to roll out an interesting show titled Shubh Laabh- Aapkey Ghar Mein. The show is produced by Jay Mehta Productions and is slated to soon go on-air. With an exceptional, thought-provoking storyline and a super talented line up of cast, the show will draw attention to the true meaning of devotion and how you can be your own miracle.

The story revolves around Savita played by Geetanjali Tikekar and her family based in Ratlam with Nasir Khan as her husband. Donning the divine impersonation of Goddess Laxmi is Chhavi Pandey.  The show also features Tanisha Mehta as Shreya, Mitil Jain as Rohit - Savita’s eldest son, Manan Joshi as Vaibhav – Savita’s youngest son and Mahi Sharma as Roohi – Savita’s daughter.

India Forums got in touch with actress Geetanjali Tikekar who spoke at length about her character and concept of the show. Read the excerpts from the interview below.

1.    How religious or superstitious are you in real life?

I’m neither religious, nor superstitious. I believe in God and thus, am spiritual. I try to find God in everything- my work, the nature, in the act of kindness, and good deeds. I believe one can rely on karma and not chamatkar for his/her success.

I relate to my character, Savita, only on the basis that her faith in God is unwavering. I believe that whatever happens in one’s life, it happens for a reason, and we keep our faith intact, learn to be satisfied and happy with whatever we are provided with in the course of our journey.

3.    You are one of the most prominent characters in the show. Your take on it.

Yes, Savita is a prominent character in the story, and it is her journey that is showcased in the show. This interesting character and the story are one of the reasons I’m doing the show. It’s a treat for every actor to get a character which is real, and a character one can relate to. Also, the character of Savita is not just relatable to me, but it will connect with the audience to the core, because I believe most Indian woman keeps her faith in God to keep her family happy, healthy, and prosperous.

My character of Savita and her persona is what prompted me to take this show. The thing that’s most exciting about this character is that she is very real. Her strengths, her virtues, and her flaws are all real, yet she’s very endearing. The viewers who will be invested in her journey will not judge her because they will understand her dilemma as well. I feel blessed to have an opportunity to play this wonderful character, Savita, which is allowing me to expand my horizon as an artiste. It’s always fun to take an extra step in understanding the character and portraying it authentically on-screen.

5.    What have you learned from your character or the show so far?

The show has just come on air and my journey with the character of Savita has just begun. So, I believe my learning about the character’s life will grow as the show progresses. It’s just been few days shooting and I would love to learn and grow with Savita’s learning through the show.

I’m looking forward to the audience’s feedback. It’s a brilliant show and I have very high hopes from it. I just hope that our audience enjoys what we bring to the table for them and keep showering us with love for the show.

ALSO READ: I have never done any monotonous character and have always experimented: Chhavi Pandey of Shubh Laabh