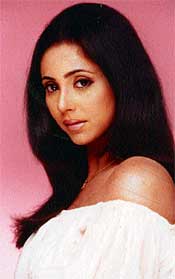 It's finally confirmed. Gautami Kapoor, the doe eyed beauty of serials like Ghar Ek mandir and Lipstick, is all set to play, quite literally, the mother of all saas in Ekta Kapoor's most cherished show - Kyunki Saas Bhi Kabhi Bahu Thi.
As she steps into Smriti Irani’s shoes and readies to play the next Tulsi, we catch up with this extremely beautiful and talented actress.

Young and beautiful…so why play a grandma right away.....

I accepted because Tulsi Virani is the most powerful female protagonist on Indian Television today, and I would have lost out on a huge opportunity in my career had I let this go just due to age statistics. Tulsi is just not any character, she is huge, it’s difficult to even comprehend the extent of reach and stature this figure has. In any case all I have been offered lately is either a bhabhi or a saas, basically elderly characters which tend to get sidelined eventually. So I am thrilled to have got this offer. I could not have asked for more.

When were you offered the role?

I was in talks with Balaji for quite a while now but nothing had been finalised . I knew I was going to play an important role, but it would be that of Tulsi is something I came to know only a couple of days back. I guess even the channel wanted to keep it under wraps.

Are you feeling the pressure?

Yes and no. Tulsi is big so expectations are high. Stepping into Smirti’s shoes will be a challenge.

Have you started shooting yet?

Yes, yesterday was the first shoot.

Any ideas about how the character or the story is going to take shape?

It has happened so quickly that I could not sit down with the Kyunki team to discuss any further aspect of this role. Whole day today I have been busy replying to the press calls ( pause and a delighted laugh), so I guess I will be able to know more when I finally get some time to sit with the creative team.

How does it feel to be back on television?

It feels absolutely great. And when the comeback is this big, it’s icing on the cake.

How does hubby Ram Kapoor feel?

He has always been asking me to come back to television, as it is a very fulfilling medium. He is my biggest support, and he is extremely happy.

As we bid goodbye to this charming and ever smiling actress, we could hear the tangible tension and the excitement she felt at the enormous expectations she would have to stand up to. We wish her all the very best, and hope her entry brings in some fresh ideas and a new lease of life to the heavily recycled never ending story of Kyunki Saas Bhi Kabhi Bahu Thi !

+ 4
15 years ago i think it will b a challenge for her to play tulsi's role but a chnage was neede n guess she will do quite well...

15 years ago Gautami's sweet... she'll do fine as Tulsi

+ 3
15 years ago She's smart, she's got guts and she can act. Even though I like Smriti a lot, I think Gautami would do just fine in this role, judging from her previous ventures. ;) Goooo Gautami! <3

reemx 15 years ago I luv the idea I was tired odf tulsi's boreing lectures and fighting 4 the truth all the time. we need a new face audience's are getin bored. I'm sure gautami is going to try her best after all she is the wify of hott ram kapoor(jai walia)