The creative director of T Series, the glamorous Divya Khosla has a lot to talk about- in terms of work, personal life, fashion and lifestyle.

Q: How does it feel stepping into the director’s shoes?
A: See I am a creative person, so direction is something which gives me creative satisfaction. I am enjoying every bit of it.

Q: So were you always inclined towards direction?
A: Yes, when I was in college I thought about direction as I wanted my creativity to be used in a fruitful way. Even in school I always used to participate in extempore.

Q: Tell us about your latest album?
A: The album is called 'Endless Love' sung by Pankaj Udhas. This is a hardcore romantic album. The album is 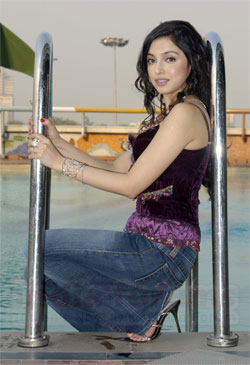 about two ex-lovers who meet after a gap of five years and what emotions they go through.

Q: What has inspired you to make this album?
A: I am a die hard romantic and sensitive person, so I always wanted to make an emotional album. When I first heard the songs I realized that the songs have a lot of depth and so I thought of directing them.

Q: What made you go for Pankaj ji?
A: Pankaj ji has never done this kind of work before. When I heard the songs the only name that came to my mind was that of Pankaj ji. I thought he would be able to do justice to the songs.

Q: Which is tougher, acting or direction?
A: Both are different altogether. Acting is only concerned with one’s feelings, while when you are a director everything has to be taken care of. Direction is an observatory task and so the tougher between the two.

Q: So are you a tough or lenient director?
A: I don't think I am tough. But yes, I am a very aggressive person. So I like my team to be focused. At times I do get strict when I see no results.

Q: Don't you think that you have given a glamorous angle to the executive class?
A: Maybe, I am young and that is why that image is built. But whenever I party, I like to dress well and do my hair. Whereas at work I am least bothered about how I am looking and what I am wearing.

Q: You are also directing an album which features Pakistani singer 'Fakir'. Tell us about that?
A: The album is still in a pre-mature stage. I will be directing it by next month. Nothing is finalized as such.

Q: What is your personal style statement?
A: I like wearing knee length dresses. I like to pick up dresses whenever I am traveling. I am least bothered about fashion. Whatever I like, I just pick that up.

Q: Soon you are going to celebrate your third marriage anniversary on February 13. How does it feel?
A: It feels nice. My husband and I share a very friendly relation and touchwood it is going stronger day by day.

Q: You have any special plans for your husband this anniversary?
A: Since the last two years we have been traveling during our anniversary. This year will be the first time when we are in Mumbai. So we will have a big day this year. I have already picked up a gift for him.

Q: Isn't it difficult to manage the ends, home as well as work?
A: It is not tough if your partner is co-operative. I don't find any difficulty in managing because my husband is always there to support me.

Q: In the album 'Endless Love' you have promoted Delhi, why so?
A: I purposely shot this album in Delhi because I feel Delhi has wonderful locations. As compared to Mumbai, Delhi has not been properly used for shooting purpose. When I was in college I used to think that Delhi does not have many production houses and so people have to move to Mumbai. So for this album ,except for Apoorva Agnihotri I purposely chose models from Delhi.