View Profile
Sonu Nigam needs no introduction. His soulful melodious singing has enchanted all music lovers and his involvement in the reality shows has made him a household name today. Sonu Nigam talks to the Telly Buzz team about his new album on classical music and his role as the judge on SaRegamaPa Lil Champs 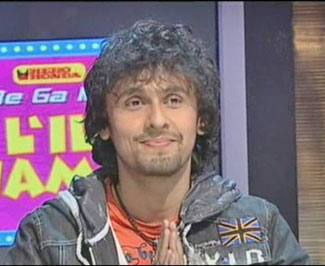 Featured Video
A very straightforward person, Sonu lets his convictions guide him and even in the midst of a crowd, he stands apart for his thoughts, actions and personality. Being a very versatile singer, he has belted out some memorable songs in every genre, and now he is coming up with a new album on classical music. The forthcoming album – "Classically Mild" is due to hit the stands very soon. It would feature songs which aim for the popular market while being laced with Indian classical elements, quite a different concept from the contemporary musical options. What made him choose for this theme for his new album? "I felt I need to give something to all music lovers. Also I felt I need to make my own parameters. Lataji Rafiji they all made their own parameters and we all tried to get there. So I also want that I make some parameter of mine which my future generation can now dream of getting," was his candid reply. Sonu worked on the album for past two years and has very high hopes from it. "I could have always gone for a pop album or a rock one. We have worked really hard for the album and I am sure you all will love it," says Sonu.

His other pet project is the musical reality show SaReGaMaPa L'il Champs where he is a judge. His contribution as a judge has given the show the much needed boost. Sonu does not agree to the notion that reality shows can thrive only on dramas. "I wanted to prove to the channel that it's a wrong notion of theirs that all these dramas and fights get high TRP. Without that also you can get it. Just now I would say SRGMP is the most clean musical show on Television. And it has got a very high TRP too," says Sonu. The show had at its early stages a plan to go for a lady judge but was later shelved. Sonu too confirms the same, "The Channel House had wanted to include a female judge too but I flatly refused as they had wanted to show some drama involving her. I had made it very clear to the channel house that, I won't allow all those judges fights and stuff in the show in which I am a judge. So I told them to get only Sureshji as my fellow judge."

With every reality shows these days thriving on drama, who is to be blamed the audience who lap it all up or the channel house that overfeeds the same old clinched stories every time? "The blame does not lie with the audience. It lies with the channel houses. One channel shows dirt, other follows it and show bit more third goes for more. Audience is watching whatever they are being given. Give them quality shows and they will surely enjoy it. They also don't like such stuff," was his prompt reply. Do we see him again in future on SaReGaMaPa seniors too? "No I have no idea yet if I'll be there in the next season of seniors or not. Just now too much is happening in my life. I am busy till May and lets see what course life takes after that. If there's nothing I'll just take chill and go easy."

Sonu's zeal for "something different musically" is surely a treat for his fans. No matter how unconventional his projects may be he knows how to turn things in his favor. He is surely a name to reckon with and is definitely a legend in the making.

14 years ago Aww!! I love him even more now!! Hes a really nce person and his voice is heavanley!! Its really nice!!!I saw him in SRGMP Lil Champs!! He did a good job there!! His album, classically mild is good!! Some nce songs in there!! I thnk tht he deserves ths aftr all his hardwork!! Well done!!! Love u always!!!! u r an absolute legend!!! Bst wshes!!!

+ 5
14 years ago Yeh banda...
Hera pheri me vishwaas nahi rakta...
what ever he is now its coz of his hardworking ability..
he always tried to do something good..

thank god there's no judge vs. judge drama on the show!

14 years ago OMG. I love Sonu as a person. He is so straightforward and honest. He is definitely a legend in the making. Everyting about him, his: songs, views, actions, hardwork, judgement, and sincerity, hardwork and his genuineness makes him what he is.

Sonu as a Judge in SRGMP L'il Champs really has changed the face of the show. God Bless.

+ 3
14 years ago Sonu Nigam is definitely a legend in the making. His songs, his views, his actions, his reactions, his convictions,his judgement,his sincerity, his hardwork and his genuine ness makes him what he is - A class apart!!!

Sonu as a Judge in SRGMP L'il Champs really has changed the face of teh show.The show may not boast of the best singer,but it still is the most popular reality show. Ever wondered why? The perfromances when added with the simplicity ,the healthy ambience,a vibes between the host,participants,judges & the families,the innocent playfulness needed in a kids show, the attractive and clean overall packaging makes the show acknowledged ,loved and appreciated by the masses. The show has maintained its number #1 position in the reality shows for months. Week after week, the popularity of SRGMP has risen high,the public like it, the TRP ratings every week say so. Whether Sonu mentions that fact or not that is the actual truth.Public seems to love the simplicity of this show and Sonu surely has contributed big time in bringing this change.

14 years ago hats off to Sonu. The best judge on the reality show, i just love him as a singer, judge and his sincerity & hard work towards anything he does. i would like to see him in the saregamapa 2008 (seniors) too. hope he will be there.
I have always respected him for what he does. I cannot disagree with what he says above. Wish you all the very best and cannot wait for the CD to release

14 years ago thnx....gud luck to sonu...nd thnx to him too he saved us all frm watching all d drama in srgmp

+ 3
14 years ago Sonu is the best singer that Bollywood Music industry has just now. One of the most versatile maybe.

He has proved himself now to be the best judge of musical reality shows too. His endevour to make the show clean of all DIRTY drama has worked. He has shown that with fun factor added to a musical show it can made into a success. And the present TRP's of the show are speaking all his claims.

Its good for all SRGMP fans that a Judge like Sonu is there in charge and bossing around.

I am really looking forward to the album. It was released yesterday. He definitely is a legend in the making. We all are really lucky to get treated with melodies from such a singer.

14 years ago Sonu is an awesome singer and I have always respected him for that.. Looking fwd to his 'classically mild'... He did give us some of the best songs of last year and looking fwd to more this year too...

But lately he has begun to come across as somewhat haughty and proud and that reflects in this interview too... Perhaps its got something to do with the issues that he had with HR last year!

Lil Champs does have its own share of drama and does waste a lot of time and energy in a lot of non-musical stuff that the show does.. The sets do remain very tacky inspite of the occassional good themes... and then, they do tend to drift away the music lovers by bringing in a lot of non-musical stuff and mediocre musical talent in the show! Also, it seems very apparent from the interview that he has been dictating quite a few terms on the channelhouse for him being there... 'I asked them to get Suresh'ji as a judge' does show that he is surely bossing around!

Also his constant talk of his show having the highest TRP and being completely clean (which is not true) is another put-off... Let the show speak for itself, if it has the merit.. One does not need to spoon-feed the point as Sonu constantly seems to be doing